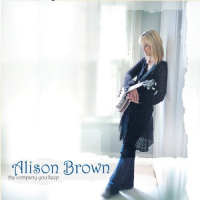 The discovery of a previously unknown species is a watershed event in the biological sciences. The discovery (or recognition) of the same in music is an equal watershed. Banjoist Alison Brown's The Company You Keep marks such a musical event. Music that stubbornly defies categorization is rare indeed and Brown's tenth release (the sixth on her and husband-bassist Garry West's Compass label) is such an event. Brown is a veritable Renaissance woman—with a Harvard degree, an MBA from UCLA, a three-year stint in Allison Krauss' Union Station, a year tenure as Michelle Shocked's music director, and an International Bluegrass Music Association Banjo Player of the Year honor. Nice resume, when you have it.

Necessarily, the word "bluegrass" has surfaced. It is indeed a large chromosomal inclusion in this music. However, while the bluegrass connection gains momentum, aural images of Bela Fleck, The New Grass Revival, Nickel Creek and David Grisman snowball through the consciousness as much as does Flatt & Scruggs' "Rocky Mountain Breakdown." While an analysis of this collection's DNA reveals all these elements, many additional ones are revealed. The Company You Keep is neither bluegrass, new grass, cut grass, or bag-o'-grass. It is something else altogether, with many other seemingly unrelated elements.

Brown's core quartet is made up of pianist John Burr, mandolinist and fiddle player Joe Craven and West. The compositional creative core is the Brown-Burr duo. Brown and Burr have been performing together for the past 15 years, a fact readily apparent by their intensely simpatico relationship. In performance logistics, it sounds as if Brown plays the banjo like a piano and Burr the piano like a banjo (or, more appropriately, a flat-picked guitar). This makes for fast-paced soloing and double-fisted accompaniment.

Burr is a superb pianist who, in another, parallel dimension, is the love child of bop founding father Bud Powell and Lynyrd Skynyrd's Billy Powell, with the precision of the former at speed, and the Southern disposition of the latter at rest. Pass that combination through a Norah Jones prism and one gets close to a possible description of Burr's talent. His playing bears this out on the disc opener, "Crazy Ivan," where he and Brown concoct a wooden music "Blue Rondo a la Turk," replete with shifting time signatures and straight-out hoedown mentality. Burr's piano solo proceeds as a string of lightning single notes encompassing the country pianos of Floyd Cramer and Jimmy Swaggart. Brown's banjo approaches flat-picking while Joe Craven's fiddle reveals more David Lindley than Vassar Clements.

"Crazy Ivan" is only the beginning. Irish accordionist Mairtin O'Connor's "The Road West" is given an American Western treatment, minimizing its Celtic elements in favor of those wide open spaces provided to traditional Irish music as it moved from the Green Rock to Appalachia, where it transformed into indigenous bluegrass. The more overtly Celtic "Rain or Shine" displays Brown's affection for lengthy, melodic banjo lines echoed by piano and mandolin. The quartet captures the perpetual motion of Irish-influenced music perfectly, extrapolating it to pieces closer to home, like "Rocket Summer" and "Over Nine Waves."

"Forky on the Water" is an exciting surprise of an island tune that recalls Sonny Rollin's "St. Thomas" and "Global Warming." The non-traditional instrumentation imparts a dry richness to the breezy melody well captured by Brown and mandolinist Cravin. The firsts among equals on the recording are "Drawing Down the Moon" and "The Clean Plate Club." The former is a lengthy meditative conversation among Brown, Burr, guitarist John Doyle and fiddler Stuart Duncan. All mentioned instruments interface seamlessly with one another in an empathetic and synergistic manner. "The Clean Plate Club" has the richest genetics of all, a ragtime piece with a vaudeville lineage imported from the Quintette du Hot Club de France's oeuvre.

Stylistically and aesthetically, the closest artistic relative to The Company You Keep is Bela Fleck's perfect Perpetual Motion (Sony, 2001). Where Fleck turned to the past for established and revered material, Brown turns toward the future, creating her own vision for music.

Crazy Ivan; Rocket Summer; The Road West; Drawing Down the Moon; Under the (Five) Wire; Rain or Shine; Over Nine Waves; Forky On The Water; The Clean Plate Club; Waltz for Mr. B.