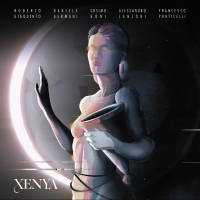 The World Watched and Waited; U do U; The Good Place; Unlike Anything else Ahead; Little Green; Feeling Nervous; Walk a Little Quicker; Chess Game; Xenya; Trabucco.

GleAM Records is proud to announce the release of XENYA, the surprising debut of the collective made up of five of the greatest Italian jazz talents, available on CD and digital download / streaming from 18 June 2021. In a historical period in which welcoming seems difficult and almost forbidden, music offers the opportunity to subvert this trend. Welcoming not only physically but also welcoming other people’s ideas, trying to be part of them and to contribute without judging.

In the ancient Greece, hospitality was sacred and represented by the "Xenya" which contained a series of rules whereby those who welcomed and those who were hosted had to exchange gifts.

Cosimo Boni (trumpet), Daniele Germani (alto saxophone), Alessandro Lanzoni (piano), Francesco Ponticelli (double bass) and Roberto Giaquinto (drums) have donated and granted each other 10 original compositions, using them as a springboard for a dip in other people’s thoughts and souls. Music flows between the different pens without favoring any of them, creating the opening of an imaginary portal towards any possibility. Welcoming therefore becomes a point of inspiration and a beginning. The album opens with Germani's "The World Watched and Waited", an intriguing theme made of lights and shades in which the sound of the collective openly declares itself in all its richness of timbres and shows an ability to conduct the pulsation in an unpredictably, meeting and moving away, but always in a mutual listening.

It’s the turn of the mysterious and introspective "U do U", in which the compositional vein and the expressive universe of the very young Cosimo Boni are expressed in the ability to wait and enhance the silences, and in the beauty of a declarative and strong sound.

In the following "The Good Place" the drummer Roberto Giaquinto reveals his talents as an inspired composer with a luminous theme, on which his drumming full of orchestral colors, impalpable energy and polyrhythmic gimmicks of great musicality is grafted.

With "Unlike Anything else Ahead", the writing returns to Germani, who offers us one of his great choral themes for sax, trumpet and piano with the rhythm building a second level, where the rigor of writing is contrasted by the freedom and interaction between double bass and drums.

We are halfway through the album and it is the turn of Francesco Ponticelli's "Little Green", an expressive turning point with a theme characterized by an edgy atmosphere and the obsessiveness of its intervals and melodic motifs. Certainly you can find in light the undisputed qualities of the now consecrated Alessandro Lanzoni, who leads the expressive atmosphere since the introduction and develops a crescendo with the quintet that acts as a springboard for his elegiac solo, and leaves space after a new thematic moment for the heated dialogue between Germani and Boni.

We are at the sixth track of the album, "Feeling Nervous" by Alessandro Lanzoni, a tune that, as the title already reveals, shows great impetuousness and descriptive skills in a post-bop dimension in which, in addition to the beautiful introduction by the composer, stand out the beautiful solos of Germani and Boni, full of rhythmic energy and freshness of ideas confirming their great qualities as improvisers as well as composers, despite the young age of both.

In fact it’s in the following track that both are confirmed as absolute out of class with "Walk a Little Quicker", a theme of great melodic inspiration written by four hands, in which, in addition to the harmony of ideas, the great positivity and beauty of thought is highlighted.

We are approaching the end and the atmosphere relaxes with the brief and brooding "Chess Game" by Ponticelli, a real pearl in which the rhythm of a chess game manifests itself in the counterpoint between the voices of the soloists and in the waits of the hypnotic dialogue of the rhythm section on the piano vamp.

The penultimate track is the one that gives the album its name, "Xenya", a wonderful and lyrical ballad written by Lanzoni, with a solemn gait, full of hope and underground bluesy references, capable of distilling the most distant experiences of jazz in a profound and full of beauty narrative. The album ends with "Trabucco", up tempo even 8th written by Germani and focused on a rhythmic vamp with a light Latin flavor on which a great lyrical theme and open harmonies are released, conducted with great energy by the entire line-up. The happiest and most inspired solos on the album take turns, in an atmosphere of sharing that translates the inspiring idea of ​​this album into music and interplay. 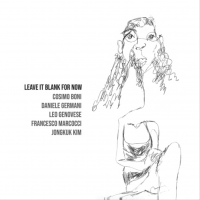 Leave It Blank For Now

All About Jazz musician pages are maintained by musicians, publicists and trusted members like you. Interested? Tell us why you would like to improve the Xenya musician page.