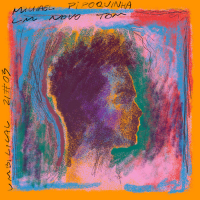 Michael Pipoquinha’s upcoming release Um Novo Tom (“A New Shade/Tone/Key” or simply “Tom”, after Michael’s youngest son Antônio) is a bold step further in his musical journey. The new compositions, arrangements and sound aesthetics show that, well beyond his virtuoso bass chops and his mastery of the Brazilian traditional styles and rhythms, Michael Pipoquinha is very much aware of what’s going on in the international contemporary jazz scene and that he has his own say in this golden era of musical eclecticism. Surrounded by some of the highest-profile Brazilian musicians of the current generation, the bass genius departs from his previous more conservative work to embrace cutting-edge contemporary musical approaches. Frantic melodies, adventurous rhythms, rich harmonic landscapes and fearless sonic choices reminiscent of nu-jazz and lo-fi hip hop place Michael Pipoquinha up there next to admired contemporary artists such as James Francies, Kamasi Washington, Ben Wendel, Robert Glasper or Thundercat.

All About Jazz musician pages are maintained by musicians, publicists and trusted members like you. Interested? Tell us why you would like to improve the Um Novo Tom musician page.