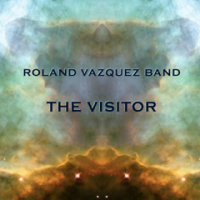 “The Roland Vazquez (Big) Band originally appeared at clubs in NYC, schools, and festivals starting in 1991. Based around my quintet at that time (Walt Weiskopf, tenor sax; Mark Soskin, piano; Anthony Jackson, contrabass guitar; Frank Malabé, congas); the horn sections grew from those who had played on “Tides of Time” (Ted Nash, Brian Lynch, Keith OʼQuinn, Jack Schatz) – and players I met while teaching at Manhattan School of Music (Tony Kadleck, Joel Frahm, Alex Norris, Dave LaLama). Other players featured in those early years include: Ricardo Candelaria, Mike Davis, Andy Gravish, Stefon Harris, Joe Locke, Dave Mann, Ben Monder, Chris Potter, Tim Ries, Emedin Rivera, Scott Wendholt, just to name a few. In 2009, I received a Recording Grant from Aaron Copland Fund for Music, Inc. towards support of recording these scores. “The Visitor”, “Urantia”, “Thru a Window”, and “Guarabé” were essentially developed during our performances in the ʻ90ʼs; with “Whirlpool”, “Sevilla”, and “The Path of Change” evolving more recently. While most of these titles have been previously released as quintet or nonet versions, I feel the 19-piece Roland Vazquez Band delivers the most fully-realized performances of these compositions to date. It has been a real gift for me to work with each of these outstanding musicians while preparing, performing, and recording this music. Their individuality of spirit clearly resonates throughout the tracks - and they have succeeded in lifting this music “off the page”.

Help improve the The Visitor page

All About Jazz musician pages are maintained by musicians, publicists and trusted members like you. Interested? Tell us why you would like to improve the The Visitor musician page.