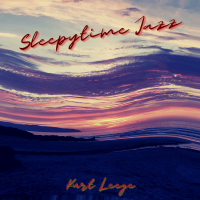 My Funny Valentine: Georgia on My Mind: Blue in Green: Tenderly: At Last: Naima: What a Wonderful World: Maiden Voyage: Nefertiti: Spiritual

Sleepytime Jazz is the long planned follow up to 2018's Sleepytime Guitar. After first releasing that album of arrangements of old spirituals and folk songs as psychedelic lullabies for my daughter, who had many issues with sleep as an infant and toddler, I immediately planned on carrying over the idea to jazz standards. Alas, a move overseas and global pandemic delayed the recordings a bit! On this release, I've greatly expanded the concept, adding more ebow, glitch delays and freeze effects. And the material itself demands so much more - complex jazz changes, melodies and harmonies. It has really been a labor of love. It brings a completely new take to some treasured jazz standards with the intention of expanding the music to new audiences - particularly those with little exposure to proper jazz. These create a textured, psychedelic, sonic hammock into which you can dissolve and every note is played on a guitar. Think equal parts Bill Frisell, Brian Eno, David Torn, Robert Fripp, David Gilmour, Jerry Garcia and Kevin Shields.