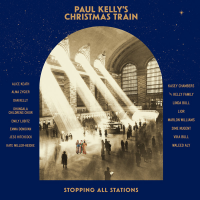 As he gathered the material for his first Christmas album, Paul Kelly soon realized that a collection of 10 seasonal standards could never cover the richness he wanted to convey. He knew he wanted to make a record that drew out all the emotions and layers of the Christmas story, and in a way that reflected the holiday experience in the southern hemisphere, far removed from the snowy imagery of so many Christmas songs. The result is an extraordinary 22-song double album that travels across the centuries, from a Latin hymn to well-known carols, from a traditional Irish folk ballad to songs with an unmistakable local flavor, and a sparkling new version of one of the greatest Australian Christmas songs of them all, Kelly’s own “How to Make Gravy.”

All About Jazz musician pages are maintained by musicians, publicists and trusted members like you. Interested? Tell us why you would like to improve the Paul Kelly's Christmas Train musician page.