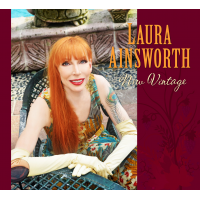 That's How I Got My Start; I'll Take Romance; Where Did the Magic Go; An Occasional Man; Wasting My Love On You; Nevertheless; A Little Jive Is Good For You; The Man I Love Is Gone; All About You; Nothing Can Replace A Man; It's A Nuisance Having You Around; (Medley) Love Ago and Far Away/You Stepped Out of a Dream; I Once Knew A Woman (Fella)

Laura Ainsworth's third album showcasing her smooth vocals, her band of top North Texas jazz musicians and her unique mix of elegant lounge/jazz styles old and new. She continues mixing fresh takes on standards with great overlooked songs from the 1920's-'60s, but also includes her first recording of one of her originals, "The Man I Love Is Gone" (written with George Gagliardi.) This album received a number of indie music nominations and awards, including an unprecedented sweep of the Artists Music Guild Awards for Album, Video and Female Vocalist in multi-genre competition. "An Occasional Man" was chosen to lead off the hit compilation CD, "This Is Vintage Now, Vol. 2: Happiness Is A Way Of Life." "The Man I Love Is Gone" appeared on the chart-topping compilation, "Goa Chill-Out Zone: Vol. 10."

All About Jazz musician pages are maintained by musicians, publicists and trusted members like you. Interested? Tell us why you would like to improve the New Vintage musician page.