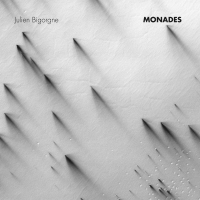 Monades is the first record of the French jazz flautist Julien Bigorgne. Passionate about traditional Turkish, Indian and African music, Julien Bigorgne has composed 14 instrumental pieces, a bit like the Orientalists, borrowing from these traditional musics their colors and rhythms while reinterpreting them. A long work of maturation gives to the compositions a contemporary character that stands out from the clichés too often conveyed by "World Music". Alternatively on the transverse flute and the oud (the Arab lute), Julien Bigorgne is accompanied by Shankar Kirpalani on double bass and Camille Petit on piano with whom he has shared many collaborations over the last fifteen years. Throughout this musical discourse of more than an hour, in which improvisations are almost absent, the titles of the album are marked by the obsession to propose melodies that are simple to hear, holding the attention long after listening ; we will see in this approach a heritage of popular traditional music. Carried by an omnipresent minimalism, the melodies are pure, self-sufficient, indivisible, embracing the philosophical concept of Monades. This approach of course pays homage to the great Orientalists such as Erik Satie, whose influence is explicit when listening to the title “Glasnost”. But the disc is also sprinkled with more contemporary melodic references such as the “Noire Iridescence” waltz in reference to the accordionist Daniel Mille or the tortuous rhythmic constructions of the titles “Io” and “Entrelacs” which put us on the path of the double bassist Avishai Cohen. Beyond the trio formula that forms the backbone of the album, the string orchestrations “Ligne de fuite” and “Lahar” punctuate the album, reinforcing the omnipresence of a melodic and cinematographic music. If the record gives the impression of a long suite with a mastered architecture, some pieces break this order, such as “Fungi”, a short improvisation on the alto flute, a sort of unstructured and atonal parenthesis in a nod to the flautist Magic Malik. The Monades disc can be listened as an exotic concept-album, a tribute to traditional music tinged with jazz, pop and image music. The Monades record is published by the label LEM (Laboratoire d'Exploration Musicale) with the catalog number LEM07. Released December 7, 2020.

All About Jazz musician pages are maintained by musicians, publicists and trusted members like you. Interested? Tell us why you would like to improve the Monades musician page.