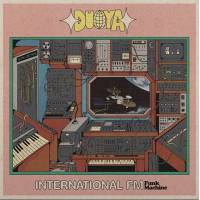 Pace yaself; Oil slick; Put some butter on it; Glisten up; International FM; Double down; Flexi with the disco-tech; Treetrunkfunk; I'd rather be loose; Elevator; Multinational mega conglomerate; Mucho suave; Night owl;

Duoya is the funky brainchild of Gustav Horneij and Dimitrios Karatzios. The two met through a shared obsession with jazz vinyl and later started jamming, eventually forming Organic Pulse Ensemble together. While that band in time would turn into a one man venture, their creative chemistry was still there when they decided to start sending recordings and song sketches back and forth during the spring of 2020. The resulting record is a socially distanced synthastic funk record. It draws from a wide variety of inspirations but mostly, it's based around the idea that anything goes as long as it's funky.

All About Jazz musician pages are maintained by musicians, publicists and trusted members like you. Interested? Tell us why you would like to improve the International FM musician page.