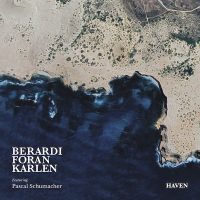 Berardi/Foran/Karlen create music that brings together captivating melodies, lush harmonies and emotive collective improvisation. The sense of group empathy is striking, with a subconscious understanding of the flow between the voice (Kristin Berardi), piano (Sean Foran), and Saxophone (Rafael Karlen) developed through years of performances and a shared musical vision. Their new album HAVEN features guest Vibraphonist PASCAL SCHUMACHER, from Luxembourg, whose sensitivity and nuance brings a new level of texture and dynamic to this stunning band and music. Formed in 2014 in Brisbane, BERARDI/FORAN/KARLEN features the talents of three distinctive Australian artists - Kristin Berardi (vocals), winner of the Montreux Jazz Vocal competition, APRA Jazz Award Winner Sean Foran (Piano), and Churchill Fellowship recipient Rafael Karlen (Saxophone). All three are known for their clear personal aesthetic & artistic voice and with their respective projects they have toured extensively, appearing in venues across Europe, the US, South America, Japan, Korea, China and at the Montreux, Bremen, Tokyo, Manchester, Melbourne, Wangaratta, and Sydney jazz festivals. The debut album from the trio “Hope in My Pocket” (2015) was the winner of the QLD Music Award for Jazz in 2016 and the APRA/Australian Music Centre QLD State Award for Excellence in Jazz at the Art Music Awards. In 2017, the group invited PASCAL SCHUMACHER to Australia for a tour, performing at the Brisbane and Melbourne Jazz festivals. While in the country the group spent 2 days in the studio tracking a new suite of music, with many of the songs written specifically for Schumacher. The result is the album HAVEN. The trio had known of Schumacher for some time, as Foran explains; We’ve known Pascal for many years; he came out to Australia for his first tour and played a double bill with Trichotomy, so I’ve been into his music for some time. Kristin has also collaborated with other members of his band at various times over the years... When we started thinking about collaborators, Pascal came to mind instantly. We were all a fan of his playing and writing, and also we were looking for a sound that would complement the trio, something a little unexpected – vibraphone fit that. We already have instrumentation that is a little unusual, so I think this pushed that even further. The album sat completed for years, with each musician busy in various solo projects, but it’s now released through the Sydney jazz label Earshift Music. With only 4 instruments, the sonic world created on HAVEN is lush. Modern jazz, folk and classical elements combine in intricate, yet light and delicate arrangements, with each instrument taking a lead role. The 10 tracks on the album are split across musicians with Berardi, Foran and Karlen each contributing works. The opener, Berardi’s No Shepherds Live Here brings a sense of calm, yet tells an intense story. Complementing this Karlen’s Ripple and Handwritten sparkle, with the Saxophone and Vocals intertwining, and the piano & vibraphone creating layered harmonic textures. Foran’s works, Orbit and Rambling bring more rhythmic energy, with the insistent pulsing Vibraphone lines giving an almost minimalist aesthetic wrapped with a modernist jazz edge. The intimacy of this work draws similarities with standout ECM albums from Azimuth, Gary Burton, and Anouar Brahem – But Berardi/Foran/Karlen define their own approach, and with Schumacher it’s a captivating world to be in.

All About Jazz musician pages are maintained by musicians, publicists and trusted members like you. Interested? Tell us why you would like to improve the HAVEN musician page.