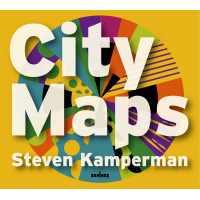 It's not an album, it's a trip! That is the motto under which Kamperman takes his listener on a musical journey through an imaginary city. On City Maps, his compositions follow a city map, with titles such as 'Grand Boulevard', 'Subway' and 'Old Bridge'. The result is an immersive program in which the listeners go through recognizable and at the same time poetic scenes. During the concerts, projected colorful cityscapes by visual artist Henrietta Müller form the backdrop for this journey. Kamperman undertakes this adventure with the Belgian trumpeter Bart Maris, and, both from the Netherlands, bass player Dion Nijland and young talent guitarist Jorrit Westerhof. In City Maps an enormous diversity of influences comes together: from Ornette Coleman to swing jazz, from rock to minimal, from contemporary composed to modern grooves. Eclectic, certainly, but, as famous Dutch composer Theo Loevendie once pointed out: “Steven Kamperman has the rare ability to make every kind of music sound like his own.” Thanks to the layered compositions and improvisations, old and new come together quite naturally, as happens all the time in the cities around us.

All About Jazz musician pages are maintained by musicians, publicists and trusted members like you. Interested? Tell us why you would like to improve the City Maps musician page.