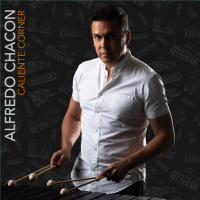 ¨Caliente Corner¨ is a wonderful sounding album featuring many Cuban rhythms like Son, Cha cha cha, Mambo, Bolero, Tango congo, Pilon, Danzon y Changui, masterly merged with the harmonies and approach of jazz. Brian Lynch, a well known and Grammy award-winning Latin jazz trumpet player is featured in two tracks of the album. Everything about Caliente Corner suggests that the multi-instrumentalist Alfredo Chacón is on his way to the pinnacle of his powers – both as a composer and as an instrumentalist. He could well scale greater heights in the future; that remains to be seen, but on musical evidence right here and now even if Mr. Chacón achieves nothing better than (he has) on the music of this album, he will have ample reason to be proud. It is an album of wonderful music and Mr. Chacón uses his own heavyweight presence to draw out the finest from a group that also includes several other heavyweights – trumpeter Brian Lynch and pianist Iván “Melón” Lewis, for instance. However, the rest of the celestial roster is nothing to sneer at either and while many of those present might not have the same so-called “star power” they are virtuoso masters of their instruments and the Latin (and Jazz) idioms. All Compositions by Alfredo Chacon Produced by Alfredo Chacon & Javier Monteverde Recorded, mixed and mastered by Javier Monteverde at Cezanne Studios in Madrid Additional recordings in Miami: Chris Palowitch Yainer Horta (Yhorta Studio) Alejandro Sanchez ( Dream Factory Studio)

All About Jazz musician pages are maintained by musicians, publicists and trusted members like you. Interested? Tell us why you would like to improve the Caliente Corner musician page.