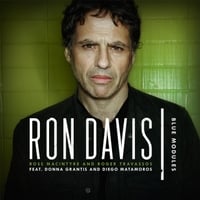 by Arthur Fish This is a truly beautiful recording. I've been waiting for a master jazz musician to respond to to-day's pop music as the heroes of the music did to the pop of their day. Ron Davis has now done it. If, like me, your musical loves include Radiohead, Bill Evans and the Jimi Hendrix of Electric Ladyland this is for you. Two things stand out for me. When I listened to this record I felt completely enfolded into a unique sonic world - as I do when I listen to Radiohead or Bjork. And Ron Davis approaches pop songs and the palette of electric and electronic sounds in a way that is completely his own. The irrepressible Rhythm-a-Ron, deeply steeped in jazz tradition and a powerhouse keyboard virtuoso, is present and accounted for, but he mutes his exuberance just enough to set up an entrancing tension with the electronic timbres he and his bandmates deploy. The dance is in the music. The song choices and sequencing are really effective. He does not "recompose" pop songs in the usual bop or post-bop manner so much as elicit their immanent content. It's a new way of doing jazz, and only a very intelligent musician could have come up with it. I've always liked Bill Evans's "Conversations With Myself" but viewed it as an interesting, failed experiment. Blue Modules starts where Evans finished, and is a wonderful artistic success - with the promise of more to come.

All About Jazz musician pages are maintained by musicians, publicists and trusted members like you. Interested? Tell us why you would like to improve the Blue Modules musician page.