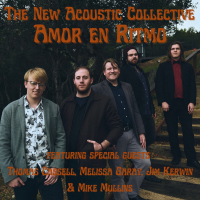 Inspired by the work of The David Grisman Quintet's 94 release; "Dawg A Nova"; The New Acoustic Collective forge new musical territory on their 3rd record release; "Amor en Ritmo"! "Amor en Ritmo" blends and fuses the dawg music of David Grisman, New Acoustic & SpaceGrass work of The Tony Rice Unit and Wyatt Rice, while creating a new fusion of styles within jazz, and beyond by fusing together and focusing their themes of this record around the beautiful rhythms used in latin music. Selections and styles include modern takes on the bolero, cha-cha, samba, bossa nova, bluegrass tinged world music fusion, and more! The official release is set for Saturday, September 3rd, 2022. Stay tuned!

About The New Acoustic Collective

All About Jazz musician pages are maintained by musicians, publicists and trusted members like you. Interested? Tell us why you would like to improve the Amor en Ritmo musician page.