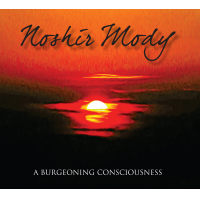 Secrets In The Wood And Stone; Consequence Of The Uninitiated; Precipice Of Courage; Reconciling Loss; Weaving Our Future From The Past; Forever July

Noshir Mody, a highly inventive guitarist and arranger-composer, has recently released his latest set of picturesque and atmospheric jazz, A Burgeoning Consciousness. Six of Mody’s originals are performed by a superior sextet comprised of the leader’s guitar, alto and tenor-saxophonist Mike Mullan, trumpeter Benjamin Hankle, pianist Campbell Charshee, bassist John Lenis and drummer Yutaka Uchida. The constantly-evolving performances are lengthy with all but one being over 11 minutes. The musicians have opportunities to stretch out and take listeners to unexpected locations. The music often features dense grooves behind the soloists, along with a purposeful forward momentum and a strong sense of melody. “Secrets In The Wood And Stone,” with its uplifting theme, colorful ensembles and hot alto solo, opens the set with the warmth of a sunrise. The mysterious “Consequence Of The Uninitiated” builds to a passionate level. “Precipice Of Courage” has a militaristic rhythm that launches fine solos from Mullan on tenor, pianist Charshee and Mody. The wistful “Reconciling Loss,” inventive groove of “Weaving Our Future From The Past,” and lyrical ballad “Forever July” add more musical adventures to the program. Throughout A Burgeoning Consciousness, Noshir Mody displays his own highly individual sound on the guitar along with a fresh imagination that reflects his wide musical experiences. Born and raised in Bombay, India, he was self-taught on guitar. Mody has stated that his early inspirations included Indian classical music, Al DiMeola’s Elegant Gypsy, music from Bollywood, and rock along with the modern jazz guitar masters. After moving to New York in 1995, Noshir Mody dedicated himself to creative music, regularly leading his own trio in clubs. His original conception to playing music was well showcased in his groups The EthniFusion Rock Ensemble and The EthniFusion Jazz Ensemble. Mody’s impressionistic playing and colorful originals were documented in his solo guitar recording In This World With You, his trio set Union Of Hearts and by his quintet on Stories From The Years Of Living Passionately. Now, with the release of A Burgeoning Consciousness, Noshir Mody has taken another giant step forward with arguably his finest recording to date.

All About Jazz musician pages are maintained by musicians, publicists and trusted members like you. Interested? Tell us why you would like to improve the A Burgeoning Consciousness musician page.