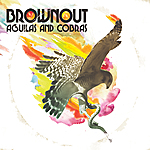 The best little R&B band in (Austin) Texas is the Latino little brother to Grupo Fantasma, which often backs up the miniature R&B tornado known as Prince. "It's funny because we can be rehearsing with Grupo Fantasma one night and then the next night the same group of guys can go back to the rehearsal room and rehearse as Brownout and the music is completely different," muses guitarist Adrian Quesada. For its second release in this Latin configuration, Brownout emerges from the deep, classic funk sound of Sly Stone to embrace the torrid rhythms and percussion of traditional Tejano and other Latin styles. "With this particular record, we tried to take it in different directions, trying to use vocals and certain things on the songs that you wouldn't expect on a funk song or on a Latin funk song," Quesada explains.

It's evident from the jump-start of the opening "Con El Cuete" that Brownout embodies the best American and Latin R&B rock and funk styles. It crackles and pops with rhythmic electricity, the Latino chant locks down into the rhythm and is echoed and punctuated by horn blast, and then fuzztone guitars cut across sideways to bust this rhythm wide open.

The title track sounds almost nothing like Latin music (jazz or otherwise), a head-on rave-up driven hard by the rhythm section and guitars while horns blow the melody off the top like a summertime convertible. Jazz heads will prefer Josh Levy's baritone sax as it rips through "Framed by Death," which melts into two more quicksilver and slippery jams in quick succession ("Another Fire" and "Olvidalo").

"Tell Her She's Lovely" was originally performed by the late-1960s West Coast Latino funk band El Chicano and its smooth rhythm and soulful, mysterious vocal transports Aguilas and Cobras back to the sunny montuno funk of that place and time. "Pole Position" kicks up a fat Memphis big beat behind reggae rhythm and blues lead guitars while Latin percussion keeps the pots boiling hot, and absolutely everybody—the rhythm section, the horn section, and the soloists—crashes headlong into its crescendos.

"Pole Position" is not only one of this set's best tunes. It's easily one of the best Latin-jazz-funk-rock-soul instrumental jams ever. It also helps Aguilas and Cobras burn from cover to cover and merit consideration as one of the best releases of 2009.