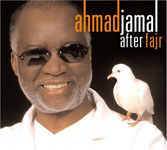 Ahmad Jamal's been making music for over fifty years, yet somehow he's still saddled with a tag as one of Miles Davis' favorite pianists. It's long since time critics put that reference to rest and aimed their focus directly at the master and his music. Jamal has a talent for placing melody front and center, but he always frames it in a bright, sparkling rhythmic context. For Jamal, a fresh delivery is as important as the notes themselves, and After Fajr offers heaps more of his distinct brand of bouncy, pointed lyricism.

Longtime companions James Cammack (bass) and Idris Muhmmad (drums) join the pianist on this set, recorded "in live situation" at Centre Des Arts in Enghien, France. The many years they've spent working together has paid off in a complementary fit where they share roles with trust and enthusiasm. On mellower tunes like "Yours Is My Heart Alone," the trio seems to be holding back (though Jamal does take a trip or two into the lower register to pound points home). However, the energetic "Milan" swings like crazy in unpredictable ways, Cammack alternating rapid-fire between single and double time before taking off in a rush, Muhammad tossing out shifts and conversational accents into open spaces. The piece is a small masterpiece of timing and group momentum.

The title track is the only one with vocals (by Donna McElroy and choral group Vox One), and Jamal's lyrics offer a message of warm companionship, but it just doesn't pack much of a punch. I'm not usually a fan of sugary vocals, though, and others may find it charming. The rest of these pieces, including four other Jamal originals, are consistently engaging and thought-provoking. Jamal makes full use of the range of the piano, juxtaposing tones and phrases in unexpected combinations, fully exploiting his bop vocabulary and riding a light funky edge now and then as well. (I sense Muhammad could go much further in this direction, but he reins in those urges for the most part.)

After Fajr is a really nice record. It's got that magical combination of drive and surprise, looseness and focus, exuberance and contemplation that have always made jazz such inviting and involving music.