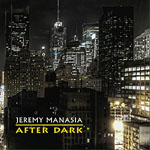 Pianist, composer and arranger Jeremy Manasia is the driving force behind After Dark, an excellent group of originals and standards rendered by Manasia, drummer Charles Ruggiero and bassist Barak Mori.

Manasia wrote most of the songs with classic jazz as his guiding principle. Up-tempo tunes like "Ruggburn" or the cool mid-tempo blues "Arch Eyes" are straight from the hard bop lexicon. In the spirited "Jake's Dilemma" one can hear whispers of Bud Powell's "Oblivion." There are subtle but substantial variations on the theme, such as "Search for Moonlight," another bop descendant that has influences ranging from Gershwin to Asian folk music. Guest star Ian Hendrickson-Smith's alto sax invokes Getz more than Coltrane on the samba arrangement of "Soul Eyes," but it neither mutes his own voice nor devolves into hollow mimicry. Jane Monheit's smoky vocals light up "When You Smile," a song whose structure and lyrics recall the golden era of singing and songwriting. And any yawns that might be induced upon seeing the title "Just One of Those Things" will be stifled quickly by Manasia's unique arrangement and the dynamism with which the trio attacks it.

Manasia continued his homage to the hard bop tradition during a lively CD release set at New York City's Smalls in late January 2009. The lineup was expanded to a quintet, featuring trumpeter Joe Magnarelli and Wayne Escoffery on tenor. The band played no tunes from After Dark; instead it showcased the music of trumpeter Kenny Dorham. The set opened with "Whistlestop," where ideas poured from Magnarelli's horn with such fury that it seemed that he wouldn't get them all out. Escoffery spun his wheels a bit initially but once he found a rhythm his solos were smartly conceived and resonant. Manasia comped deliberately throughout the set but played his own solos with the same fluidity he displayed on disc. The versions of "Sunrise in Mexico," "Escapade" and "Our Thing" were so tight and blistering that it made one want to run out and buy every single Kenny Dorham recording possible.