By JOHN KELMAN
December 1, 2007
Sign in to view read count 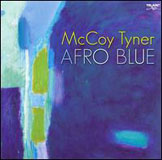 While his days as a true innovator are long past, pianist McCoy Tyner, now approaching seventy, has continued to make fine music. In many ways, his post-1970s work has been more about stylistic breadth, contrasting sharply with the more focused modal inventions with John Coltrane in the 1960s that have made him so influential and have reserved a place in jazz history books. Still, while the music collected onto the compilation Afro Blue, documenting Tyner's eight-year tenure with Telarc, doesn't break any new ground, it does find the veteran pianist in a variety of contexts, from solo to trio, quartet and quintet. There's even some very defined Latin jazz to be found, making this a good sampling of where the pianist has been since around the turn of the decade.

Two tracks are included from 1999's McCoy Tyner and the Latin Jazz All Stars, including a groove- laden reimagining of Mongo Santamaria's "Afro Blue, a tune Tyner played many times with Coltrane. While Tyner takes the longest solo—and the one most closely referencing his approach with Coltrane—he's a democratic leader, providing ample space for flautist Dave Valentin, longtime saxophone collaborator Gary Bartz and, most notably, trombonist Steve Turré, whose shell solo is amongst the best he's done on record. Both "Afro Blue and a fiery version of Kenny Dorham's "Blue Bossa are driven hard by a potent three-piece percussion section.

Two tracks from Tyner's solo album Jazz Roots—McCoy Tyner Honors 20th Century Piano Players (2001) demonstrate that even the most distinctive players have roots—and keep abreast of contemporaries and even younger artists. Rather than each tune reflecting a specific pianist, Tyner creates collages, with his own "You Taught Me How to Sing bearing the unmistakable stream-of-consciousness stamp of Keith Jarrett, but by way of Bill Evans and Chick Corea, and with a little Art Tatum stride thrown in for good measure. A delicate reading of Gershwin's "Summertime is equally inclusive. What's perhaps most remarkable about these tracks is how they avoid Tyner's signature approach while still sounding like nobody else.

"If I Should Lose You, from 2004's Illuminations swings in an ambling, mainstream fashion and features strong solos from bassist Christian McBride and Bartz. That album also featured trumpeter Terence Blanchard, but he's not heard here. "If I Were a Bell, from 2003's Land of Giants, is another mid- tempo swinger, this time reuniting Tyner with vibraphonist Bobby Hutcherson.

Two trio tracks from 2000's McCoy Tyner with Stanley Clarke and Al Foster complete the compilation: the up-tempo "The Night has a Thousand Eyes and Latin-esque "Carriba, featuring a lithe electric bass solo from Clarke.

Afro Blue may not be revolutionary, but it is evolutionary. Tyner demonstrates, with this compilation, that he's continued to create engaging and relevant music long after his undeniable creative zenith of the 1960s through the mid-1970s.

Afro Blue; If I Should Lose You; You Touch My Heart; If I Were a Bell; Summertime; The Night Has a Thousand Eyes; Blue Bossa; Cariba.