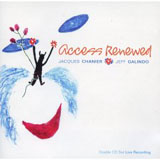 A ridiculous thing happens when a person is diagnosed with cancer. At first panic occurs as you sprint to doctor appointments, and that hurriedness intrudes on your daily life. Later as you live with the disease, your slow down to a jog or maybe even stop to smell the flowers. When brain cancer strikes an artist like Jacques Chanier, the fleet-fingered pianist, all time stops.

So when he does return with a live recording such as this, attention must be paid and great rejoicing happens upon hearing his expression.

Recorded in February, 2007, Chanier is joined by trombonist Jeff Galindo for two live sets of Thelonious Monk music and other jazz classics.

His prior speed and scorching piano technique have been altered by the disease, but his ability to express emotion remains vital and maybe even makes that emotion more convincing.

The six Monk tracks chosen are not simple melodies. The difficult "Epistrophy" is slowed and dissected into a blues puzzle with jagged edges. Trombonist Jeff Galindo plays the perfect confrere, rounding out the piano points. Roles are reversed on the tougher "Evidence." Sped up by Chanier, Galindo's turn here is to jab and slurs things while the pianist skips his way through the tune. The trombonist opens with the plunger on "Ask Me Now" and the accompanying Chanier turns in a very sentimental passage that finishes with a ineffable sweetness.

Galindo's finest performance comes on Sonny Rollins' "Oleo," rolling with the nimble playfulness of this classic. Each set on this double disc release ends with the fusion of two standards. The second set features the vintage burners "Cherokee" and "Giant Steps." Here it is not speed and bravado that prevail, but graceful playing and the pianist's grateful nature. Well done.