By MARCO ANDERSON
August 27, 2006
Sign in to view read count 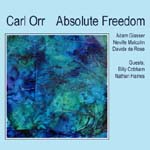 Absolute Freedom, Australian guitarist Carl Orr's fifth self-produced album, is a classic funky jazz-rock tour de force. The recording is reminiscent of many of the finest funky jazzthetics of the mid-'70s, also showcasing the guitarist's inimitable mix of fiery guitar licks and compositional flair. The retro sound fits that decade's mark as the zenith of this genre, and that feeling is further strengthened by the presence of no less than king of the fusion tub thumpers, Billy Cobham, on two tracks. (Orr toured with Cobham in the late '90s.)

The album's strong opener, "Unstoppable," features Cobham's driving rhythm and Nathan Haines' lead soprano. This track would be at home on any of the drummer's great Atlantic platters from the mid-'70s and was written particularly for the drummer's live set. It's also a good attempt at writing a Headhunters-style tune: funky and fairly minimal, but with a memorable melody.

"Dangerfunk, the album's musical high point, is twelve minutes of fusion at its best, again powered by Cobham's trademark Latin-tinged, funky drums. Orr's guitar soars and screams over the batterie, using a variety of effects to turn up the heat. His inspired and accomplished playing here shows him obviously at ease with the esteemed company. Cobham's playing is also majestic, ranking along with some of his best recorded work.

The guitarist's wit is evidenced by the inclusion of Donald Fagen's "Tomorrow's Girls, a strange choice; Orr embellishes the simple melody, adding tasty licks very much in the Scofield style. With "Return of the Jazz Police, a light-hearted tune aimed at a well-known jazz trumpeter and self-appointed constable, his Scofield roots are even more pronounced. Always mindful of the composition's requirements, though, he exudes good taste, an individual approach, and a personal sound that can cry like Hendrix, comp with Scofield's surety, or sculpt with the originality of McLaughlin.

"Non-violence is the Only Way Forward is another super-fast groove held down admirably by Davide de Rose, and the title is self-explanatory. With this and "The Price of Peace, Orr lays his philosophy firmly on the table (he has been a practising Buddhist for over twenty years). This last track features a remarkable chromatic harmonica solo by Adam Glasser (who also contributes keyboards to the album), as well as an intimate and heart-felt bass solo by Neville Malcolm.

If Carl Orr can lay claim to a place in the top pantheon of guitarists in this genre, it is not through blatant fret-melting technique, though he shows he has chops in abundance on more than one track. Nor is the artist himself a self-interested extrovert or wild showman. His prowess lies in mature composition and soulful, yet acerbic and profoundly tasteful guitar, often knowingly betraying his major influences in Hendrix and Schofield.

Not many guitarists can call on players the quality of Cobham and Hines for their solo projects, and their endorsements are, to an extent, validation of Orr's work. With this album he deserves to become a more familiar name, like a vintage wine waiting to be discovered.