Maria Muldaur: A Woman Alone With The Blues 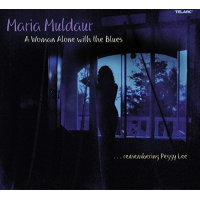 When Peggy Lee died last year, the jazz world—and the entire music world—lost one of its greatest balladeers and stylists. Simply put, when you hear Miss Peggy Lee's trademark hushed sensuality, you immediately recognize that her voice could belong to no one else. Maria Muldaur, a steamy chanteuse who made her name in blues and roots music in the ‘60s and ‘70s and then successfully shifted to jazz in the ‘80s, has resurrected Lee's ethos for A Woman Alone... (Ms. Muldaur discovered her own theme song, "I'm A Woman," on the B-side of Lee's "Fever& quot; in a jukebox.)

Muldaur happily succeeds in taking both well-known and rare songs that Lee performed and making them her own. Anyone who sings Lee's signature hit "Fever" must explore it differently; indeed, Muldaur's direct, coy rendition is truly unique. From the jaunty and joyous "Freedom Train" to the subtle and reflective "Black Coffee," she evokes Lee's style without ever imitating her. The stellar highlight of the recording is a carefully-nuanced reading of "For Every Man There's A Woman," in which the singer projects an ethereal romantic longing.

A rarity for a vocalist in that era, Lee was also an accomplished composer; the tunes she wrote with her guitarist husband Dave Barbour slink along with melody and rhyme worthy of the best Tin Pan Alley talents. (It seems odd that, as a self-proclaimed fan of 40 years, Ms. Muldaur was unaware of Lee's work as a songwriter; she wrote dozens of hits and famously sued Disney for the improper use of her Lady and the Tramp film score.) But Muldaur should be given credit for not selecting these numbers instead of certain other tunes associated with Lee - "Big Spender," "Is That All There Is?" - which may have been requested at concerts, but don't truly reflect Lee as an artist. If Muldaur ultimately isn't as distinctive as the legend she honors, she makes a strong case for the ongoing potency of Peggy Lee's legacy.