L'Tanya Mari': A Teardrop of Sun 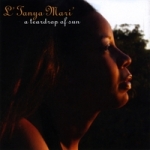 L´Tanya Mari´ could not help but be so profoundly affected by music, considering her native Philadelphia. After a well-rounded jazz education, including the tutelage of Grady Tate, and establishment as an educator, Mari´ releases her debut, A Teardrop of Sun. Mari´ enters an already crowded market, one populated with as many difference singing styles and accompaniment configurations as there are singers.

How does she make herself stand out? With a perfectly unadorned and simply phrased vocal style riding a perfect pitch voice. Her approach is not unlike that of a young Wynton Marsalis, who debuted with sharply-coiffed early recordings, well conceived and played.

If viewed as a masters seminar, A Teardrop of Sun could be heard as an effort to display the rich loam of material available to the jazz singer. Mari´ could have very easily produced a disc of standards that would have been thoughtfully chosen and played and delivered a more than acceptable listening experience. Instead, she goes light on the "standard" standards and proposes a few rarely played compositions of her own for consideration.

Bill Evans' "Very Early" and Arlen/Koehler's "I Gotta Right to Sing the Blues" are about as different as two songs can be. Mari´ takes them and with the input of her crack rhythm section and support musicians, infuses them with her jazz vision: relaxed, considered, urbane. Mari´'s brand of jazz vocals is neither about taking chances nor playing it safe. It is all in the presentation - one that is sleekly professional and warmly down home. Both elements are evident on the anthemic "Nothing Will Be As it Was" and the vocal take on Chick Corea's "Crystal Silence." Mari´'s confidence and command are present and palpable.

"Star Eyes," "That Old Black Magic," and "You Go To My Head" all are given fresh, straight-ahead reading. Pianist Harry Appelman grounds the pieces while Mari´ weaves her magic spell of impeccable technique and true feeling.

Very Early; Nothing Will Be As It Was; I Gotta Right to Sing the Blues; Star Eyes; This Is New; The More I See You; Crystal Silence; That Old Black Magic; You Go to My Head.