By MICHAEL MCCAW
September 20, 2005
Sign in to view read count 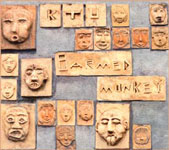 KTU, pronounced K2, has a lot of things working against it when it comes to finding potential listeners. When someone picks up an album that consists of musicians performing with a Warr guitar, vocal samples, rhythmic devices, and accordion, there isn't a reference point to really draw on that would even come close to the sounds these four individuals are able to create through their talents of alchemy. What they do have going for them is being on the consistently vibrant and boundary-pushing Thirsty Ear label, and hopefully people will be willing to make a leap of faith into this engrossing set of music.

KTU, a double duo formation of musicians—Kimmo Pohjonen and Samuli Kosminen of Kluster, plus Pat Mastelotto and Trey Gunn from King Crimson and the duo TU—creates not so much a soundscape, but an enveloping world of sound. A convoluted analogy would be as if someone decided to put together such disparate recordings as King Crimson's Thrak, DJ Spooky vs. Dave Lombardo's Drums of Death, random voice samples, chants, and portions of Yann Tierrson's Amelie score, then remixed them, layered one on top of the other, and applied an insurgent rhythm not unlike the churning of Dream Theater.

Nonetheless, Pohjonen is the uncredited leader here, singly or jointly contributing four of the five songs, and his accordion is certainly a driving force behind the music. He plays with a variety of techniques, including meticulously layering his accordion not unlike the way Bill Frisell does with his guitar, looping sounds and playing them backwards, sustaining bent notes, and using volume swells as thematic and soloing devices.

Gunn's Warr guitar also serves as a consistently interesting solo voice within the group. A combination of both bass and guitar more similar to a Chapman stick than Charlie Hunter's axe, it is played by tapping the strings which allows Gunn to deliver numerous parts at the same time and utilize a myriad of sounds from the King Crimson-like knotty lines of "Absinthe to seemingly floating bass swells on top of an electro-acoustic guitar bed of sound on "Keho.

Of the many highlights of the album, some of the especially ingenious in nature are the ringing bell breaks in "Absinthe, the crescendo of beats and accordion that crests in "Sumu, the melodically layered "Sineen, and the otherworldly "Keho, where the listener drifts through space while being presented with sounds from all angles.

And although the music may appear to sound awkward based on this description, it draws one in to repeated listening and reveals more beauty every time. One then begins to discover new sounds and how they are built, not by mysticism but of collaborative science. Throughout the record, everyone contributes to the music through both conventional (by today's standards) and unconventional means, creating a truly unique sound—one that people of more exploratory tastes should definitely seek out.

Visit Kimmo Pohjonen on the web.