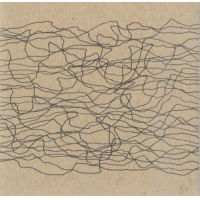 33 bays is the second release from the duo of Canadian guitarist Tim Olive and Portuguese electro-acoustic artist Alfredo Costa Monteiro, following their previous A Theory of Possible Utterance (Zeromoon, 2011). On 33 bays, Olive plays one-string electric guitar plus electronics, while Monteiro uses electro-acoustic devices. The album was recorded live in the studio with no overdubs, in Kyoto, in October 2009, during a Japanese tour. Over several days the pair recorded a number of pieces of which only two were selected for this album, those two running for just under 28 and 16 minutes respectively.

As is so often true with albums where more than one participant is employing electronics, it is often impossible to determine who is responsible for any particular sound. The only sounds that can safely be attributed (to Olive) are those of an amplified guitar string being struck and scraped. Otherwise, the combination of the contributions is best judged as a totality. Not long into the first untitled track, there is a prolonged passage of a sound reminiscent of stone being scraped; as that is not in accordance with the credit for either player, it is best to appreciate the sound in context without being too concerned about its source; an observation that is true of the whole album.

Although their individual contributions often cannot be identified, the whole does sound like two artists playing together, responding sensitively to each other and interacting with one another. Electronically, they generate a huge array of sounds that go way beyond "pure" electronic sounds—sine waves, white noise etc—and are reminiscent of real world sounds such as stones being scraped or percussion being rattled.

The duo seems comfortable working with long durations, slowly building up its soundscapes and then letting them evolve slowly and organically without feeling compelled to introduce any sudden or dramatic changes. So, there are no nasty surprises or shocks. Rather, this is rich, detailed music that can serve different purposes: it can function as ambient, background music that can "just be there" without acting as a disturbance or irritant; but, if given full attention, it contains sufficient detail to command attention and repay repeated listens, offering something new each time.