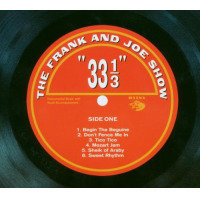 If you were in New York City some Sunday night and you should chance to wander by the nightclub Sweet Rhythm, you would experience a musical happening of ever-increasing proportions. There, guitarist Frank Vignola, percussionist Joe Ascione, and "their merry band of music makers" hold court for an ever-expanding group of devotees. What makes these events noteworthy is the breadth of different musical dialects spoken: gypsy swing, breezy island melodies, cowboy kitsch, Latin and Spanish-tinged evergreens—or should I say cacti?—and jazz and pop standards coexist in a rhythmic mélange as ageless as amphora, and as trendy as tomorrow.

Record producer Joel Dorn has brought this ensemble into the studio for their debut album, a sampler that ranges from Cole Porter and Harold Arlen to a comic book hero's theme; from Mozart and Rimsky-Korsakoff to the Doobie Brothers; from Gilbert O'Sullivan to Hoagy Carmichael. The result is a very listenable, but not particularly jazzy recording, one that plays to the considerable interest in gypsy swing that exists today. While lacking the excitement of a live performance, it nonetheless sparkles with consistent virtuoso musicianship and good humor. For instance, I was about to get indignant over the simplistic harmonization of the bridge of "Paper Moon," when I heard the music segue into "Who's Afraid of the Big Bad Wolf," and I realized the joke was on me. And if you pay full retail price for this album without realizing it is only 37 minutes long, the joke will be on you.