By GENO THACKARA
October 9, 2019
Sign in to view read count 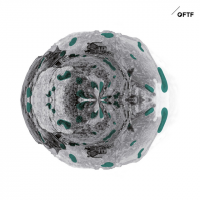 Swiss folk probably isn't the first thing anyone will associate with this Gang's particular art at first glance. It starts by dropping straight into churning action without any buildup, kicking off with a classy swinger that gradually trades catchiness for a pile-on of horns that snowballs until it all breaks down in chaos. With the next track comes an initially baffling series of wonky piano and sax lines. The following selections continue making a somewhat angular challenge if approached in terms of straightforward melody. Consider the overall structure as a representation of a scene or a feeling, though, and things begin to make a lot more sense.

Zwischen: Grund und Grat is primarily inspired by the painter Giovanni Segantini's landscape series Alpentriptychon, featuring pieces based on its parts (Life, Nature and Death) while drawing on traditional Swiss music as well. The GangArt sextet doesn't go for obvious touchstones like folk instruments, however; instead this lineup (triple horns, piano, bass and drums) conveys the themes in a more impressionistic way, with twisting leads that rise and dip like mountain skylines.

Raphael Walser's arrangements can make the occasional jagged chording and brassy clamoring sound more weirdly accessible than they really should. At other times the angularity just about disappears; "La Natüra" briskly coasts on a summer breeze and "Las Mintinedas" spins a short catchy dance for the disc's happiest moment. The result is definitely jazz, but veers into non-jazzy modes more than recognizable bop or swing. The soloists get space to go however far out they wish in turn, smoothly and seamlessly trading off their quick individual jaunts before coming back to some kind of unison, however noisy it gets. It's a fine and challenging outing for a group that (much like its label) always enjoys looking at everything at least a little bit sideways.