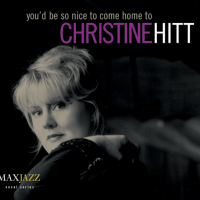 Diana Krall, et al. With Love Scenes, Diana Krall has made a huge name for herself singing standards in a sexy breathy voice. No less talented, Christine Hitt, a Minnesota-born singer/pianist, caught the eye of MAXJAZZ’s Richard McDonnell who in turn caught her in the electronic medium of the compact disc, You’d Be So Nice to Come Home To. Hitt, like Krall, uses a small band format to cleverly spin through the standards.

Talking Out of School. Hitt came by her musicianship honestly, being the daughter of two musicians. She is classically-trained, having degrees in music the Universities of Minnesota and Arizona. She began playing jazz while a member of the United States Air Force Band and has worked with Dizzy Gillespie, Marilyn McCoo, and the Tommy Dorsey orchestra. She currently teaches jazz studies at Webster University.

Soto Voce. Christine Hitt’s voice has a very pleasant and pliant tone that enables her to readily interpret standards as disparate as “I’ve Got a Crush On You” and “Dream a Little Dream of Me. For her debut recording for the fledgling label MAXJAZZ, Hitt is joined by the able talents of drummers Tom Kennedy, Jeff Hamilton, who both deftly use brushes on the majority of cuts. Guitarist Rick Haydon and Clarinetists Scott Alberici shine on “Moonlight” and “In A Mellow Tone”, respectively.

You’d Be So Nice to Come Home To is a wholly satisfying survey of deftly performed standards that should make content even the fussiest listener. It expresses the true spirit of jazz.