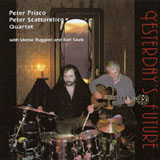 Yesterday's Future presents an obscure New York quartet live in the studio. The band has the casual rapport of players who have known and played with each other for a long time. This little known guitar and drummer led band plays very good jazz.

Peter Prisco is a sophisticated guitarist with influences that range from Chuck Wayne to Lennie Tristano. He certainly has not taken the easy road. He is capable of long, complex solo lines that recall both his mentors, and has a guitarist's touch reminiscent of Wayne. His poignant solo work on "But Beautiful" should be evidence enough to convince any seasoned listener that Prisco is a musician to be reckoned with. All four musicians solo on that track, contributing intelligent and emotionally attuned musicianship. Notable is the accompaniment that everyone extends to each other.

Drummer Peter Scattaretico has a tasteful, sly approach to keeping the band in the groove; he's a smart, savvy operator and a big reason for the cohesion of this group. Pianist Vinnie Ruggieri is a wise, bluesy player who, at times, can be downright funny; his solos seem especially sensitive to the emotional changes of the music. He provides a fine balance to Prisco's more intellectual approach to improvisation.

Bassist Earl Saul's subtle rapport with Prisco is highlighted on "I've Grown Accustomed To Her Face." When Saul solos, he moves gracefully into the lead position. A careful listener will notice how easily the guitar, piano, and drums shift behind him, providing multi-textured accompaniment to his solo work. In short, these musicians are marvelous listeners and solid jazz musicians. This fine session suggests that another studio recording from this band is long overdue.

You'd Be So Nice To Come Home To; But Beautiful; Ash Wednesday; I've Grown Accustomed To Her Face; I Love You; Blues For Del; What A Difference A Day Made; Broadway; My Old Flame.