By MARK SULLIVAN
December 13, 2017
Sign in to view read count 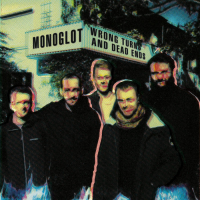 MONOGLOT is still the Swiss/German/Icelandic jazz/rock quintet based in Basel, Switzerland that they were on their first, self-titled album MONOGLOT (Self Produced, 2014). But there have been some changes. The first is new bassist Florian Keller. More significantly, the composing is now split between guitarist Kristinn Kristinsson (who wrote everything on the first album) and saxophonists Sebastian von Keler and Fabian Willmann. I don't know if that is the reason, but the group has a more unified sound this time out.

They have more fully embraced the rock sound that was present on the first album to some extent. The tunes are shorter on average, and the rhythm section is heavier. They do not sound like a new band, but they do sound like a more focused one. The hard sound is announced immediately in the opening track's jerky rhythm, Krisinsson's "Wake Up Song." If the rhythm doesn't wake you up, the dissonant interjections certainly will. "N192" comes from Wilmann's pen. It harks back to the minimalism of the first album—both saxophones playing a repeating figure like you might hear from Philip Glass—but with a distinct rock feel underneath.

"Swing" opens with solo guitar, joined by a saxophone melody that sounds like a ballad. Not exactly a swing feel rhythmically, but more like it than the other tracks. By the time the full band has entered there is almost a power ballad feel to the repeated vamp. Von Keler's "Staphylococcus Aureus" opens with atmospheric sounds, demonstrating that the group still retains a space for non-rhythmic improvisation. In some ways the short "The Coast" encapsulates the sound of the band: a power trio rhythm section riff, with the horns supplying dissonant commentary...and there's even space for a saxophone solo in the two minutes and twenty-six second playing time.

Is this jazz or progressive rock? Who knows, but it's definitely music for listeners who don't care about the distinction. Especially recommended to fans of the labels MoonJune Records and Cuneiform.