By EDWARD BLANCO
February 6, 2008
Sign in to view read count 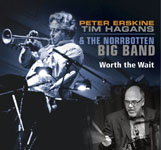 Peter Erskine and Tim Hagans shared the stage in the early 1970s as members of the Stan Kenton Orchestra, which provided a nurturing atmosphere for two young musicians and a beginning to their musical careers. After decades in divergent paths, this recording reunites the drummer and the trumpeter in another big band setting that's, well, Worth The Wait. The duo front the sixteen-piece Swedish Norrbotten Big Band (NBB), which Hagans has directed since 1996, in a live recording for Sveriges Radio P2 (Swedish Radio) at the Kulturcentrum Ebeneses in Luea, Sweden.

Playing with the NBB offered the perfect platform for the performance of their seven original compositions on a world stage. The big band's mission is to perform original music while featuring star soloists such as Joe Lovano, Toots Thielemans and Chris Potter; here of course, Erskine and Hagans fill that role admirably.

The album is actually one half of a two-record release from Erskine's independent record label, while the other album, Standards (Fuzzy Music, 2007), features the drummer in a piano trio. There are no sweet ballads, charming melodies or simplistic big band charts, the music on this disc flows to a more sophisticated groove sure to draw the interest of the jazz aficionado who leans towards the progressive big band sound.

Though the music is accessible, the intricate arrangements offer ample solo space for various members of the band to join the co-leaders in play. The opening title track, an Erskine composition and Hagan arrangement, offers a glimpse of the nature of this recording as the music features the sounds of altoist Johan Horlen and bassist Martin Sjostedt early on, with later solos from Erskine that only become brassy midway towards the track's end.

The woodwind section comes alive on Hagans' "You Should See My Office," where the two featured artists take their turn in the spotlight only after tenor Mats Garberg sets the stage with a solid performance of his own. Another Hagans tune, "First Jazz," delivers what is unquestionably the best swinging number of the album as Hakan Brostrom's play on alto outshines the leaders.

Composer/arranger and professor of the Eastman Jazz Ensemble at the University of Rochester, Bill Dobbins contributes arrangements of Erskine's "Plan 9" and the percussive "Scotland, Africa" where Erskine takes over the tune with his prowess. He is again showcased as the only soloist on the Hagans finale, "Drum Row," where the band plays only a supporting role.

This Erskine and Hagans big band project in no way resembles the classic orchestrations they were a part of during their Kenton days. That's not to say that the new music they are a part of now isn't as good or wasn't worth the wait, because the music is definitely good and the wait, certainly worth it.

Visit Peter Erskine and Tim Hagans on the web.

Worth the Wait; You Should See My Office; Plan 9; First Jazz; Scotland, Africa; Reason To Believe; Drum Row.