Jim Kerl's Swing Session Big Band: With Thanks to My Friends 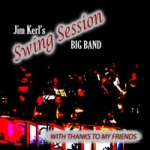 To the average listener, there are basically three kinds of big bands: those that are as good as advertised, those that aren't, and those that are much better than expected. Trumpeter Jim Kerl's Swing Session Big Band definitely belongs in the last category.

The reasons are clear. First, the musicianship on the band's inaugural album, With Thanks to my Friends, is beyond reproach; second, the charts, more than half of which were written by the incomparable Tom Kubis, are excellent; third, the solos, even though relatively concise, are invariably admirable; and fourth, the band lives up to its name by producing a session that really does swing.

Kerl has enlisted sidemen (and one woman) who can play, and the ensemble is sharp and synchronous throughout, starting with Kubis' frisky arrangement of the standard "Undecided and ending with a couple of Count Basie favorites, Ernie Wilkins' "Basie and Sammy Nestico's "Have a Nice Day. Kubis also arranged "Alley Cat," Juan Tizol's "Caravan, and another standard "Goody Goody, and wrote "Theme without a Movie and "Samba de los Me ("Somebody Loves Me, get it?).

There are four vocal tracks, two each by Melanie Vail ("Goody Goody, "Skylark ) and Joey Jewell ("Where or When, "I Wanna Be Around ). She's earnest, he's hip, and together they create a pleasant change of pace. The rest is instrumental, with Kerl soloing brightly on "Undecided, "Alley Cat and "Movie. Others who enlarge their small window of opportunity are alto Cliff Colon, trumpeter Brad Smith, tenor Ted Dortch, trombonist Dan Haeck, pianist Pat Thompson, and drummer Chris Monroe.

The album is dedicated to Randy Lintott who arranged studio time for the recording date and was a mainstay in the band's trumpet section. Lintott died in December shortly after the album was completed. Even though the playing time is relatively brief at roughly thirty-nine minutes, few of them are squandered. A largely commendable session that is, as noted, better than envisioned.

Undecided; Alley Cat; Goody Goody; Where or When; Caravan; Theme without a Movie; Samba de los Me; I Wanna Be Around; Skylark; Basie; Have a Nice Day (39:03).

Title: With Thanks to My Friends | Year Released: 2007 | Record Label: Northwest Recording Artists