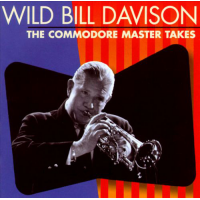 Take a generous scoop of traditional New Orleans jazz, with its intricate three-horn counterpoint, add a hard-driving, hell-for-leather beat, shake well, and you've got Chicago-style jazz. No one made Chicago-style more exciting than cornetist Wild Bill Davison, and these recordings catch him and his cohorts at the top of their game.

Wild Bill Davison was one of a kind, a cornetist who took hotness to an incendiary level and whose slashing, supercharged attack made him an icon of Chicago-style jazz. Chicago-style, first played in the 1920s (think speakeasies and flappers), retained the glorious three-horn counterpoint of traditional New Orleans jazz, in which trumpet or cornet play the lead melody while clarinet and trombone fill in the spaces with their own melodies (see Louis Armstrong and his Hot Fives and Hot Sevens in this series). But Chicago-style replaced the staid rhythms of New Orleans jazz with a more fluid, hard-driving, pedal-to-the-floor pace. Imagine going from a stately walk to a sprint.

In the hands of Chicago-style's best practitioners, that combination of precise melodic counterpoint and hell-for-leather rhythm can produce irresistible music —as you'll hear in this disc. Considering that it was remastered from records made in the 1940s ("Commodore" was the original record label), you'll find the sound surprisingly crisp, all the better to hear what's going on in the ensembles.

At full throttle, Wild Bill Davison could blow a sonic cyclone through that horn, squeezing out an astonishing symphony of rasps, growls, shrieks, and smears —a vent for emotion and a way to jab his colleagues into pushing themselves. But Davison was no novelty act. His wildness was grounded in a perfect sense of time, and although he wasn't a gifted improviser, he was a master at leading other musicians in creating counterpoint, always leaving plenty of spaces for them to fill in as he burned his way through the tune.

Joining Davison to create the counterpoint on this disc were some luminaries in the world of traditional jazz: George Brunies on trombone, and either Edmond Hall, Pee Wee Russell or Albert Nicholas on clarinet. Eddie Condon, who played rhythm guitar on these tracks, was a jazz impresario, spokesman and renowned jazz club owner who no doubt helped organize the sessions. Concentrate on the 12 tracks that feature Brunies on trombone. He's a master at creating counterpoint and a strong, assertive player—a perfect match for Davison.

Unless you're a devotee of traditional jazz, most of the tunes on this disc, which date back to the jazz bands of the 1920s, won't be familiar to you. Not to worry. They're straightforward and catchy, and the simple solo improvisations are easy to follow.

Not so easy to follow is that three-horn counterpoint. Here you have two choices. You can sit back and let the totality of the sound give you a pleasant rush—like letting the view of a summer forest wash over you as a beautiful, undifferentiated sea of green. Or you can heighten the beauty by listening hard and calling on the analytic part of your brain to dissect what's actually going on with the three horns. Can you pick apart the sounds of the cornet, trombone and clarinet, and hear the three separate melodies they're weaving together—differentiating between the oaks and the maples in that forest? That kind of listening takes some concentration, and you'll no doubt miss some things (you couldn't process them all unless you were sitting next to the musicians), but it's a fun challenge while you're soaking up the overall excitement of the music.

Finally, what's in a name? New Orleans and Chicago-style jazz are often referred to as "Dixieland." That can make the purveyors of this music wince, because it calls to mind a bunch of guys in striped blazers and plastic boaters grinding out "old-timey" jazz. Good music doesn't need costumes.

Davison's version of this standard, first recorded by Louis Armstrong and his Hot Five in 1926, features precise counterpoint almost throughout. From 0:55 to 1:33, focus on the tight, tricky trombone work, the notes placed perfectly in the spaces left by the cornet. At 2:09, a nice staccato trombone solo. At 2:26, the horns play at reduced volume, so you can hear the three lines of melody more clearly, and then at 3:15 they pick it up for a grand finish.

The ensemble opens with hard-driving counterpoint, but listen at 0:16 and 0:24 for two sudden stop-time interludes when the clarinet plays softly and gently while all else is hushed—a delightful contrast. The clarinetist, Edmond Hall, is the most gifted improviser on these sides. In his solo at 1:34, listen to the way he molds the melody into interesting new shapes. At 2:06, it's back to the original theme in counterpoint. Listen at 2:22 and 2:30 for more stop-time interludes for clarinet, except this time played strongly and passionately. At 2:38, a more subdued, lower-volume chorus, so you can most clearly hear the three horns weave their melodies, and at 2:54 a full-throated finish.

This one's a lot slower, all the better to hear the ensemble counterpoint. Davison first blows a very subdued intro without accompaniment. "Listen," he seems to say, "I can play just like a normal cornetist." That purity doesn't last long. At 0:24, he breaks into a solo replete with his trademark slurs, smears and rasps. At 1:05, a beautiful clarinet solo by Edmond Hall—passionate, inventive, yet structured as if telling a story. At 1:45 comes one of the strongest, clearest and most satisfying counterpoint choruses on the disc. While you're enjoying the assertive cornet and trombone, listen carefully for the clarinet's more subtle counter-melodies.

Another slow one, with passionate solos by Davison and clarinetist Edmond Hall. It starts with a bit of introductory counterpoint by the group, and then at 1:52, Davison massages the tune as only he can do—he may be "Confessin,'" but not quietly. At 1:52, a pretty piano solo by Gene Schroeder that sounds softly reflective after Davison's outpouring. At 2:15, a short but intense solo by Edmond Hall's clarinet, and at 2:39 the group closes out in counterpoint.

This old standard is adapted from a march composed at the turn of the 20th century, and a vestige of that martial feeling reverberates throughout. Listen especially at 1:06, when the cornet and trombone pound out a bit of Sousa-like pomp in low register while the clarinet lightly fills in, high above them. That's followed, at 1:21, by one of the most delightful interludes on this disc, in which the song's traditional clarinet solo is played while the trombone repeats the basic melody. A duet made in heaven.

That's A-Plenty; Panama; Riverboat Shuffle; Muskrat Ramble; Clarinet Marmalade; Original Dixieland One-Step; At The Jazz Band Ball; Baby Won't You Please Come Home; I Don't Stand A Ghost Of A Chance With You; Jazz Me Blues; Little Girl; Squeeze Me; A Monday Date; I'm Confessin' (That I Love You); Big Butter And Egg Man; I Wish I Could Shimmy Like My Sister Kate; Sensation Rag; Who's Sorry Now; On The Alamo; Someday, Sweetheart; High Society; Wrap Your Troubles In Dreams; I'm Coming Virginia; Wabash Blues.