The Geordie Approach: Why Eye

By EYAL HAREUVENI
November 27, 2007
Sign in to view read count 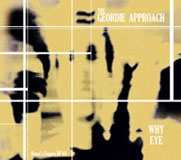 The Geordie Approach is an experimental collaboration between Norwegian alto sax/electronics player Petter Frost Fadnes, drummer Ståle Birkeland with Geordie-born Englishman guitarist/ electronics player Chris Sharkey, all proud members of the Leeds Improvised Music Association. All have collaborated with some of the most prominent figures of the fertile music scene in Leeds, UK, including pianist/composer Matthew Bourne and percussionist Paul Hession.

The group's debut album was recorded on Simon H. Fell's French label, Bruce Fingers, with Fell as producer. All seven titles refer to past football heroes of England's premier league and national team, all North-East England Geordies, but behind these humorous titles lie uncompromising and challenging attempts to link a broad range of musical flavors, from free improvisation through indie rock to raw electronics and noise, all without loosing their groove-based textures.

The trio's condensed energy, just on the verge of violent outburst, can be heard on the opener "Beardsley, sounding similar to Finnish/American guitarist Raoul Björkenheim's Sorch Trio. The trio's abstract envoys on "MacDonald come close to the musical territory of Norwegian electro/improv quartet Supersilent, where Fadnes and Sharkey toy with ambient, analog sound sources, and on "Keegan," where they construct an eerie, mysterious soundscape.

The trio succeeds in articulating a firmer original voice on subsequent tracks, and weaves the contradictory approaches of its members on the longest track, "Gascoigne," "Shearer" and "Milburn, where the players pursue their incessant and tribal-metallic drumming, funky guitar acrobatics with heavy doses of distortion, and inspired noisy ambient-grooves; but all sounding as though converging organically into one close musical sphere. The closing "Robson is a sometimes focused, other times looser and funk-based piece, with some noisy and distorted ornaments, but still uncompromising and determined in its structure, much as football player Bobby Robson was in his finest hours.