Whitesnake at the NYCB Theatre at Westbury 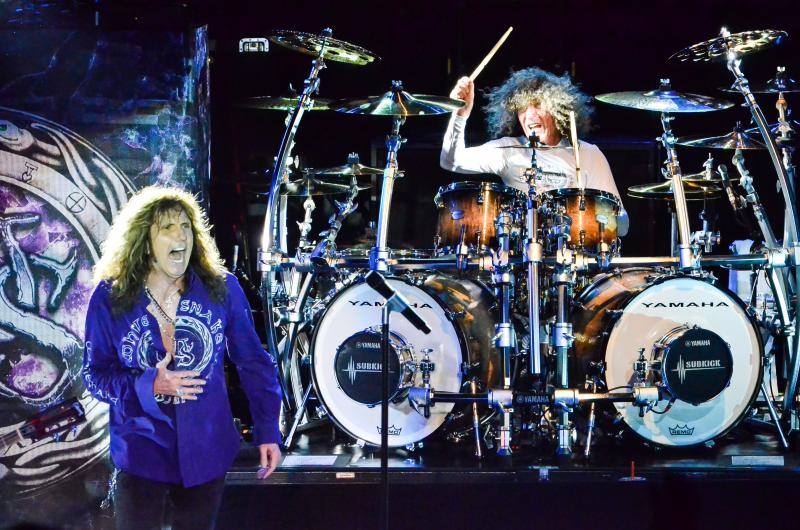 In 1978, following his departure from Deep Purple, David Coverdale formed Whitesnake. Since that time Whitesnake's music has evolved from sounding much like the blues-rock of Deep Purple to a more accessible rock 'n' roll-based ethos and then back to the Deep Purple sound, with its The Purple Album (Frontiers Records, 2015) containing rerecorded versions of Deep Purple songs originally released when Coverdale was a member of the band.

Since its debut, Trouble (United Artists/Sunburst, 1978), Whitesnake has had numerous members come and go: guitarists Steve Vai, Vivian Campbell (currently with Def Leppard), Steve Farris (of Mr. Mister), Warren DeMartini, John Sykes and Adrian Vandenberg; keyboardists including the late Deep Purple co-founder Jon Lord, Richard Bailey and Don Airey; drummers Cozy Powell, Aynsley Dunbar and Brian Tichy (these days, a member of the Dead Daisies); and bassists Marco Mendoza (also a member of the Dead Daisies), Rudy Sarzo, and Tony Franklin (of the Firm) have all, at one time or another, played in Whitesnake.

The band's self-titled 1987 Geffen Records album was a worldwide smash, featuring the huge hits, "Here I Go Again" and "Is This Love." Propelled by those songs, the album peaked at number 2 on the U.S. Billboard 200 and reached number 8 on the UK Albums Chart. It has been certified by the Recording Industry Association of America (RIAA) as eight times platinum in the United States alone. Its RIAA platinum-certified follow-up, Slip of the Tongue (Geffen Records, 1989), reached the Top 10 in both the U.S. and UK.

Over the years, the band's most notable songs have included (in addition to "Here I Go Again" and "Is This Love") "Slide It In," "Still of The Night," "Judgement Day," "Bad Boys" and "Forevermore." Whitesnake currently includes (alongside lead vocalist Coverdale) drummer Tommy Aldridge, guitarists Reb Beach and Joel Hoekstra, bassist Michael Devin and keyboardist Michele Luppi.

Opening the evening's festivities, the Dead Daisies' short set was a relation, mixing powerful hard-rocking, high-energy originals with choice covers such as a reworked, heavier version of Howlin' Wolf's "Evil," Joe South's "Hush" and The Beatles' "Helter Skelter." Opening with its own "Mexico," the band provided the Westbury crowd (many of whom had not yet reached their seats) with a blast of rock 'n' roll that made even the most jaded concert-goer take notice. Before the song had ended the empty seats were filled and the audience was at attention.

Corabi introduced the band and its 2015 Spitfire album cover of an old Sensational Alex Harvey Band track from Framed (Vertigo, 1972) with a simple, "We're called the Dead Daisies. We have a new record out. It's called Revolución. This is one of my favorite songs by one of my favorite bands. Maybe you know it. It's called 'Midnight Moses.'" What followed was a brawny and excellent version of the song, with the rest of the band's bad-ass set leaning heavily on Revolución, its "With You And I," "Devil Out of Time" and "Make the Best of It" appearing alongside "Lock and Load" from the band's 2013's self-titled Spitfire Music debut.

Following a short intermission, Whitesnake took the stage. The audience rose to its feet and rocked to the beat from the minute that Coverdale reached the center of the stage and the opening notes of Deep Purple's "Burn" (recently recorded for The Purple Album) were struck. Fist-pumping was the norm as the band roared through "Slide It In" and "Love Ain't No Stranger."

Following "The Gypsy" (another Deep Purple cover), Coverdale addressed the mostly middle-aged audience, saying, "Thank you so much! It's good to be back here. We've got a new album out called The Purple Album, paying tribute to the band. In fact, they were here last night. Coincidence? I think not."

In addition to the Deep Purple covers (which also included "You Keep on Moving," "Mistreated" and "You Fool No One"), the band played the songs that everyone in the audience wanted to hear: "Give Me All Your Love," the blockbuster "Is This Love" and "Bad Boys."

Whitesnake's and Coverdale's performance had it all, with lengthy guitar and drum solos, during which Coverdale took the opportunity to change out of his sweaty clothes; sing along opportunities where the crowd joined Coverdale on the ballads; women rushing the stage; and Coverdale venturing out into the aisles of the intimate arena. Though the venue's security staff tried to clamp down on the picture and video taking, Coverdale provided many opportunities for the folks in the crowd. Cellphones remained out for most of the evening as he pranced, pumped his fist, pounded his chest, pointed to various people in the crowd and twisted, spun and twirled his microphone stand. The crowd, of course, ate it up.

The main set ended with a version of "Here I Go Again" that was more muscular than the original album and single releases, as the audience sung along with Coverdale on the chorus:

"An' here I go again on my own,
Goin' down the only road I've ever known,
Like a hobo I was born to walk alone"

The band returned for its encore, an epic version of "Still of the Night," yet another song originally released on the band's blockbuster Whitesnake (Geffen, 1987) (one of a trio of songs that featured Tawny Kitaen in its videos). During the song, a fracas started in the front row, to which the NYCB Theatre security quickly put an end and the band played on as though nothing happened. At the end of the song, the band members came to the front of the stage, waved to the fans, took their bows and exited to the dressing room.

When a heritage act, or an act with a lengthy career, plays a concert there are usually a few givens: the performance will feature a number of its biggest hits; some interesting between-song banter; a little less hair on the heads of the band members and a few extra pounds around their midsections. Thankfully, in the case of Whitesnake, the only given was the greatest hits selections. But even the set list was far from the norm. Though the band played many of its best-loved songs, it also played quite a few songs from its latest release. The banter was cut to a minimum. And, lastly, in the 63-year-old David Coverdale, the audience was treated to a frontman still at the height of his powers, who has retained his long locks and was in fantastic shape both physically and vocally.

Unfortunately, the same could not be said for many members of the audience. For every member who had aged gracefully, staying sober to enjoy the show, dressing in an age-appropriate manner and/or bringing his/her kids to the show, there were just as many older guys sporting girlfriends way too young for them, faded beauty queens tottering on their heels, guys who left their best selves in the '80s and drunken idiots (of both sexes) making fools of themselves. Much of those antics sound stereotypical, but on this night it was all too real.

Fortunately, the music was what mattered most. After almost 40 years, Whitesnake proved it could still bring it. The band was a tight, well-oiled machine, delivering crisp, crunchy, powerful, rocking versions of its hits, fan favorite album cuts and strong reimagined Coverdale-era Deep Purple tracks.