Where the Dark and the Light Folks Meet

By DANIEL KASSELL
July 3, 2010
Sign in to view read count 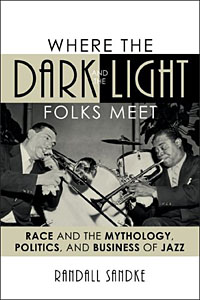 In Where the Dark and the Light Folks Meet, musician and author Randall Sandke tackles the stubborn and controversial question of whether jazz is the product of an insulated African-American environment, shut off from the rest of society by strictures of segregation and discrimination; or whether it is more properly understood as the juncture of a wide variety of influences under the broader umbrella of American culture. His book takes the latter course and shows how the widely accepted exclusionary view has led to decades of misunderstanding surrounding the true history and nature of jazz.

Sandke argues that, in previous discussions of this subject, facts that did not fit prevailing ideology often trumped reality. He believes, on the other hand, that jazz has attained much of its richness and sophistication from the interaction of a wide variety of musical traditions and attitudes—but that the majority of jazz writers have supported the exclusionary view that white musicians are inauthentic jazz players.

The future, however, is Sandke's focus. He believes that an ever-simmering musical stew, and hard won racial harmony, can only result in greater empathy between races.

Sandke discussed the book on May 3, 2010 at the National Jazz Museum in Harlem. Even Loren Schoenberg, the interviewer, got caught up in the complexities of the issues and injected his own summation of the facts, thereby previewing presumed reactions to these racially charged ideas. From the floor, saxophonist Charley Gerard stated that "jazz is about the formation of identity in the face of racial difference."

Sandke's powerful, polarizing and perhaps inflammatory opinions may well exacerbate this highly-charged debate. He produces evidence which he says shows that African Americans don't support jazz, while white promoters, producers, label execs, publicists and magazine editors have supported the music for commercial reasons—but also because they love it. In Chapter 7, The Biggest Myth of All, Sandke refers to a National Endowment for the Arts Research Division Report, conducted in 1992, in which author Scott DeVeaux concluded that "blacks were disproportionally represented."

Sandke's conclusions are worth citing. Ending Chapter 7, he writes: "In any event jazz attracted a diverse audience...(and has the) ability to cross all boundaries of race, gender, and class...Sometimes this attraction lies in its perceived exoticism...recognized by its 'American-style' freedom." For Sandke, "jazz is the intimate and direct expression of one soul to another...There simply are no racial boundaries."

A chapter heading quote from Martin Luther King, Jr. may represent a view shared by many readers: "We may have come in separate ships, but we're all in the same boat now."