Markus Gottschlich: When The Day Is Done 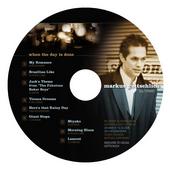 A player who is not just an interpreter, but also a composer, has to make a choice when putting together a debut CD. His or her desire is to present to the listener what they are about musically—in essence: who they are, where they have been, and how they got there. Is the best way to get this across to put together a program of interpreted standards, or of originals?

Pianist Markus Gottschlich, originally from Vienna, Austria, ended up—in a roundabout way—in Miami, Florida. He wanted When The Day Is Done to reflect his experiences—many of them occurring late at night—as a solo performer, while presenting the album as an integrated program that flows through differing moods. He is well aware of the danger that his generation's "mp3" mindset presents to a concept album that has some meat to it and delays listening rewards.

His choice of going the standards route can be debated, although there are only two tunes ("My Romance" and "Here's That Rainy Day") that qualify as well-known standards, and hence are immediately recognizable. What cannot be debated is Gottschlich's skill as a player, and a painter of emotions via music.

Although the record is short (under forty minutes), the nine selections feel much longer because of the wealth of detail, the constant surprise, and the depth of emotion that is present in virtually every moment. Although un-ringing the bell of the liner notes is difficult, it is safe to say that the atmosphere of a player in love with the music, playing for the sheer joy of in-the-moment creation with but a few people listening, is very strong.

Gottschlich says that he did not want "to hide behind my own compositions that nobody knows—yet." While the "shock of the new" does not guarantee grabbing a listener's attention, the unfamiliar does ask for a more undivided mind, and can reveal much about the composer. On the other hand, the overly familiar and traditional approach can fail to differentiate the newcomer from an admittedly crowded field.

The problem is solved by how the well-known melodies of "My Romance" and "Here's That Rainy Day" are taken apart and improvised upon, with the referent never far away; and also by the initially jolting, stride treatment of John Coltrane's "Giant Steps," which would turn the head of anyone who recognized the tune. Just as important is the inclusion of Wayne Shorter's "Miyako," a lesser-known tune that moves through a number of moods and has an unexpected ending; or Michel Petrucciani's "Morning Blues," which is anything but a simple 12-bar blues.

When the Day Is Done accomplishes what Gottschlich set out to do. Hopefully more will be heard from him, by way of his originals.

Title: When The Day Is Done | Year Released: 2008 | Record Label: Self Produced