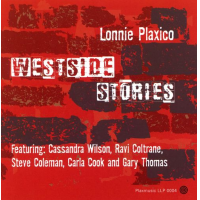 The theme of West Side Stories points to the neighborhood where Plaxico grew up: Chicago's West Side. He was brought up with a wide variety of musical forms, from funk, groove and soul to swing, pop, bop and mainstream jazz. Like most of us, the bassist has always enjoyed the spontaneity that comes with musical variety, and his career affiliations with Art Blakey, Dexter Gordon, Chet Baker, Jack DeJohnette and Cassandra Wilson reflect this inherent property. His music brings goose bumps to the skin and releases adrenaline in our veins.

Plaxico's torrid, extended Funkadelic features the acoustic quintet with Ravi Coltrane, allowing the ensemble to explore contemporary jazz with excitement in high gear. As a high point of the album, this piece pushes the envelope. Similarly, Plaxico's "West Side Stories drives hard and fast in a powerful plunge that stirs the senses.

"I Want It to Be, a collaboration with Cassandra Wilson, features Plaxico's electric bass in a vocal arrangement that grooves leisurely on a cool foundation. Later, featuring Wilson and Steve Coleman, "One Less Bell to Answer adds to the album's cooler phases. Coleman and Wilson return for Dan Fogelberg's "Longer, which brings a mellow demeanor and another familiar fragrance to the session.

Hotter numbers such as Plaxico's "Duke it Out and "Speaking in Tongues explore the contemporary scene with all systems go. The leader has created an exciting session that draws from his West Chicago youth and seasons it with his New York experience. His recommended West Side Stories grabs you hard with soul-stirring attitude and won't let go.

West Side Stories; Climb Every Mountian; I Want It To Be; Robin's Dance; One Less Bell To Answer; Funkadelic; I Want To Know What Love Is; Longer; Duke It Out; Speaking In Tongues; Your Love Speaks To Me.