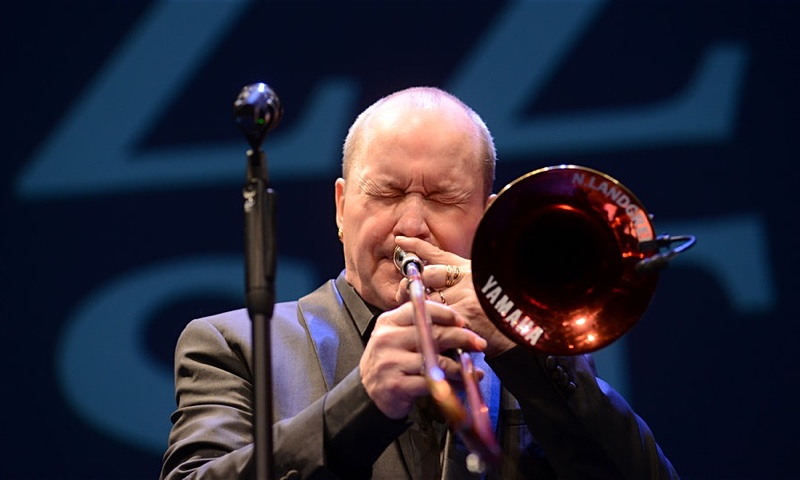 The multi-stationed broadcaster WDR (West German Radio) is known throughout most of greater Germany as a powerhouse of jazz programming and concert promotion. That lofty reputation was upheld and then some with Jazz Fest 2016, which included a Saturday night with one of the strongest single day lineups of pure jazz seen recently. From a pair of dynamic big bands to some intense small formations, it was optimal artistry all the way.

Landgren All Stars with Bochum Symphony

What probably should not have come as such a surprise is how Nils Landgren's tribute to Leonard Bernstein stood out on a long, late night of exemplary performances. Featuring the same jazz musicians and orchestra that recorded Some Other Time (ACT 2016), this sterling show served as an excellent release party since the album came out the night before, in time for Landgren's 60th birthday. The Swedish trombonist is very popular in Germany and the audience roared at nearly every note he played, as his trademark red horn shined across the stage in a reflected spotlight.

Prolific Landgren has a distinguished catalogue, and this is one of his more noteworthy projects. Listeners could really feel the passion. As Landgren's tones floated over the ensemble you could imagine the composer's smiling spirit overhead, gleaming amidst the uniquely decorated ceiling. Conductor Vince Mendoza's arrangements were inspired.

Landgren sang on many tunes, including a solid take on "Wonderful Town." A too smooth vocal delivery didn't work so well on "Cool" but for the most part, especially on the poignant "Somewhere," Landgren's voice fit the themes almost perfectly.

Drummer Wolfgang Haffner shined on the brushes during those pieces with just the quintet playing. Jan Lundgren had the right touch on piano and bassist Dieter Ilg held a booming bottom line for all. As each player took a brief solo, it was interesting to observe the reaction from various sections of the 17-piece symphony as they observed.

The hall's acoustics favored singer Victoria Tolstoy most, especially during "Lucky to be Me." On "Something's Coming," from West Side Story, the vocals soared so crisply it sounded like a dub. "Wrong Note Rag" was another standout.

As the concert concluded, the group finished strong with "Same Old Story," Landgren's collaboration with the late Joe Sample. Excellence remains the same story for Landgren, and it hasn't gotten old, by any means.

Landgren's solo horn encore, played as he took apart, then reassembled his instrument, ended with sputtering mouthpiece lip service samples from "Smoke on the Water" that left most of the full house grinning.

There was considerable hoopla about Michael Gibbs and Hamburg's NDR Big Band reprising his arrangement of "Maurizius" by Eberhard Weber, which premiered to acclaim in Stuttgart last year. Gibbs and the big band almost achieved some very lofty goals, though not quite. While the set was of a very high standard, Langren's previous frolic was a hard act to follow for a full hour, and NDR's set ran a bit long, if judging from eventual stirring in the seats. NDR did come out with a roar. Trumpeter Rainer Winterschladen hit deep space with some inflated cheeks that Dizzy Gillespie would probably relate to and approve of.

All was not created in perfect harmony during "And on the Third Day." Some sound waves got lost in the undertow mix, but the soundboard was sorted by the song's end. Sometimes it barely looked like Gibbs was conducting, no real issue since he'd illuminated the ensemble's path long ago.

"That piece plays itself, but now we have to work harder," mused Gibbs. His hands were a bit shaky as he shuffled the charts, but the conductor's earnest, stream of consciousness commentary between numbers was engaging and educational regarding a bandleader's state of mind. Gibbs admitted to borrowing ideas from his inspirations like composer Olivier Nessian or Kenny Wheeler. Gibbs brought plenty of his own ideas to life.

Pianist Vladislav Sendecki stood out on "Back Where I Belong," and guitarist Stephan Dietz added nice accents throughout. There was a touching take on "I'll Look Around" from a Billie Holiday songbook Gibbs is currently working on.

In a subtle and effective counterpoint to the larger groups, the second half of the evening consisted of intimate shows in a smaller venue.

Some festival "small" stages are actually just a spot on the floor in an area more like a closet, not designed for music. WDR does an excellent job picking sights for live broadcasts and the theatre where these late shows occurred was perfect for music, comfortable seating and all, during a late night/early morning feast.

The inspired piano and bass duo with Sebastian Sternal and Dieter Manderscheid was broadcast live, and the pair proved fully worthy of the airtime. Bassist Manderscheid, who leads the jazz department at Cologne Hochschule, has worked with Robert Landfermann (who performed on an earlier night), among others. They immediately stretched the limits of what most of us in the hall had seen before regarding the range of their instruments.

The duo offered precision, dual interplay and exemplary improvisational anticipation. Both men worked their butts off, and the stage's stark, club like setting highlighted their efforts. There were many musicians from the previous orchestras in attendance, and their faces beamed with appreciation and respect.

Sternal pretty much played his half of the dynamic straight up, first with flourishes, then off beat pauses as he alternated leads on a set that included "Musica Callada" and "Prelude to a Kiss."

The pair travelled wide range of acoustic tones, with no electronic enhancement beside amplification. Their only effects, and there were plenty, came from masterful touch. Charles Mingus's "Reincarnated as a Lovebird" was one of many sublime moments showing Manderscheid's skills.

Less than a hundred hard core fans stayed to observe Saturday's late set, an after midnight finale by the Chris Speed Trio. Those die hards that stuck around got a great, intimate performance from an emerging, all-star cast. Speed has been making a name around NYC, and he did the same abroad tonight. Bassist Chris Tordini has appeared in various formations in Germany over recent years, sounding better tonight than ever before. Everyone knew drummer Dave King.

Introduced to the German radio audience as "jazz extreme," the band got right down to hard bop basics. One Gallien Krueger amp worked great for the bass, and a couple small stacks of house speakers provided the best typical "jazz" harmonics of the night. King went into full frenzy but maintained a light touch on the aptly titled "Nimble Demons."

As the rhythm section locked into contented grooves on "Fidele" and "Platinum on Tap," Speed was definitely feeling it. Though he'd performed the night before, Speed still looked a bit wired. As he used a US dollar bill to clean between his keys, it seemed like he was just off the jet-lagged plane. That might have helped the high-intensity set.

King was a show by himself, though his resounding snare might have usurped a couple of Speed's solo runs.

The trio has only been working together a couple years, but sounded almost as tightly aligned as King's The Bad Plus mates, with roller-coaster variations on time and spacing in a set that included "Really OK" and "Takedown."

Every once in a while you see a show that reminds you exactly why you love jazz. Speed's trio delivered that show.

One of the vital constants in Jazz Fest is artistic director Dr. Bernd Hoffman. Hoffman, a lecturer at Cologne universities, is also a musician (bass,piano) with a fine sensibility of what combinations work for various days' themes. His deep foundation as a music historian has further established WDR's jazz vision.

"The philosophy of programming jazz within the WDR 3 radio station and the WDR Jazzfest is sustainability," reflected Hoffmann. "As the media system is federal, I have the responsibility to show what jazz scene we have in this area of North Rhine-Westfalia. And that scene is great, as we have a lot of festivals and two universities with a high output."

"We try to figure out at an early point which musicians will be important and we follow and support them," explained Hoffmann. "One example is the WDR Jazz Prize that is part of the WDR Jazz Fest. The winners each year are musicians from this region. And former Jazz Prize winners will present their actual stuff at the current festival. So we see the development of a musician. That is exciting, and one of our goals."

Hoffman further explained the genre's consistent popularity in the area. "We have several festivals with a long history of programming avant-garde as well as traditional jazz all over this region. Also, the university situation is very good. Cologne is close to France and the Netherlands, so we are also in a good spot."

"One of our main goals was to get out in the region and to bring jazz to the people all over the area. We changed the festival from a steady location to a traveling festival and we have been in a different city each year since 2013."

The night was cold and rainy, but wonderful for jazz. This edition of Jazz Fest was another fitting example of the wide range and vital role that the Cologne-based conglomerate WDR provides to Germany's cultural scene. Fortunately, jazz is still thriving as usual in many places, despite social and financial pressures from the current refugee crisis.

Attempting to determine just what it was that made the day so special highlights the comprehensive concoction that came from a well-planned mix. All points north, south, east and west were covered, intangible but distinct, across the cool crust of planet jazz. Jazz Fest 2016 offered a wide range of earthly delights throughout the weekend, and on a very special Saturday WDR was out of this world.