By NENAD GEORGIEVSKI
March 25, 2009
Sign in to view read count 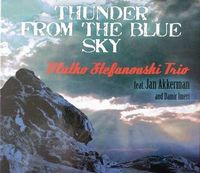 Thunder From The Blue Sky

Blues music has never only been about endless guitar solos and licks, but the emotions and feelings that pull those guitar strings. Be it happy or sad or angry, it has never been limited geographically, except in some minds, and has become a universal language that many people identify with.

Vlatko Stefanovski, one of Europe's premier guitarists, has always had that blue note in his playing and, given the broad spectrum of music genres he has put his fingers to, it would have felt incomplete if he hadn't done a proper, all-out blues album during his career. The blues repertoire was also present in his first band, Leb i Sol's earliest playlists as, by their own words, in the early days, whenever they would play all their original material, the band would also play blues standards. Stefanovski's first solo album had two original blues tunes, "Life is an Open Road" and "Red Blues," but beside that he has never really delved into the blues area completely. Thunder From the Blue Sky is Stefanovski's first album entirely devoted to blues music, covering some of the best blues classics.

Not so long ago the cover version was a derided format, associated largely with manufactured acts devoid of their own ideas. In the current pop climate, however, the cover has become an admired art form in itself. One of the trademarks of the repertoire from Leb i Sol and Stefanovski's solo career was a unique approach to covering Macedonian folk songs. One of the most important things to achieve when covering other writers' tunes is to impose your own unique style and to have your own interpretation, rather than walking in other people's footsteps. Though the cover form is the easy way out commercially, it can also sometimes become a minefield artistically if the artist is not up to it. Stefanovski, at this point in his career, is up to the challenge.

The track list on Thunder includes such blues chestnuts as BB King's "The Thrill is Gone," Ray Charles' "What'd I Say," Muddy Waters' "Hoochie Coochie Man" and tunes such as "Texas Flood" and "I'm So Glad." The approach Stefanovski takes is in total contrast to his youthful, stinging, flashy guitar lines as he takes a sparser, economic approach, punctuated by raunchy licks. With classics such as these one can do no wrong. Among the standout tracks is "Dizzy Fingers," by Edward Confrey, originally played on a piano. Stefanovski's rollicking guitar sounds like a twister on this track. The band's groovy support only magnifies the humorous and dizzy feeling behind it.

Beside the covers, there are two originals by Stefanovski. "Country" is a popular tune from the soundtrack "Shmeker" that he did during the 1980s. The title track is a gritty blues composition that shows Stefanovski pulling out many of his six-string tricks and taps.

Joining him on this endeavor, beside his regular band, are Damir Imeri on keyboards, and guitar legend (and Stefanovski's childhood guitar hero as well), Jan Akkerman. Thunder From the Blue Sky sees Stefanovski breathing new life into these standards and the result is a rich, easy-rolling album that is awash in poignancy.