Vinny Golia: One, Three, Two / A Gift for the Unusual / Music For Like Instruments; The Flutes

By BRANDT REITER
October 14, 2005
Sign in to view read count
Several years ago, the esteemed jazz critic Gary Giddins named Sonny Rollins' This Is What I Do his #1 album of the year. Among its many other merits, Giddins celebrated what he referred to as the record's "LP-ballpark length. "You can actually take it in in one sitting, Giddins wrote, adding, "How many 75-minute epics, excellent in sections, become wallpaper by the eighth nine-minute track?

How many, indeed. My answer: most. Cases in point: three albums by the very gifted pan-reedist Vinny Golia. Based in California, Golia has been a major force on the West Coast avant-garde scene for more than thirty years. He's a fantastically talented player, uncompromising in his music and a true visionary; with Nine Winds, the label he founded in 1977, he's given voice to many players outside the New York-centric jazz world and helped archive their work.

In short, Golia's important and absolutely worth paying attention to; if you don't know him—and far too many New Yorkers do not—you should. However, as Giddins infers, there can be too much of a good thing and these three albums are it. The first, a double set, runs a whopping 144 minutes, the next two over an hour apiece.

Of the three releases, the live album is the most consistently interesting. Recorded at three Belgian gigs in 2001 on the heels of September 11, One, Three, Two finds Golia switching off between eight different horns while headlining a first-rate quintet of longtime SoCal associates. (Very longtime, in fact: the remarkable brothers Cline have been playing with Golia since '76, Michael Vlatkovich since '81.) It's a good picture of what Golia does in a small group context—investigative free improv, both delicate and rambunctious, based around quicksilver original compositions which concern themselves more with texture and chaos than swing or groove. (The insistent, Alex Cline-fueled "Drum in the Circle of Stone and the Nels Cline-highjacked "The Happy, which respectively open and close the disc's second volume, are notable exceptions.)

As so often with Golia, the pieces are lengthy, rarely falling short of ten minutes and more often than not approaching twenty, which partly explains the disc's length; still, the double disc is simply too long for its own good. Judiciously culled to one, it might be indispensable. 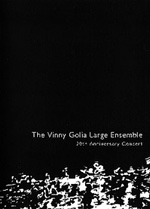 Vinny Golia
A Gift for the Unusual: Music for Contrabass Saxophone
Music for Like Instruments; The Flutes
Nine Winds
2005

Similarly, A Gift for the Unusual and Music For Like Instruments; The Flutes each have their moments, but eventually they sag under their own weight. The former showcases Golia on the tubax, a dazzlingly flexible (at least in Golia's hands) variant of the unwieldy contrabass saxophone. It's startling to hear a horn this deep be so fluid and expressive and Golia again surrounds himself with some of the best players in the business (his witty duet with keyboardist Wayne Peet, "Eye My, is particularly choice).

But as good as the music is, there's simply too much of it; even the novelty of the tubax grows thin by the hour mark. Likewise, the all-flute, all-the-time lineup of the latter record is guaranteed to perk up the listener's ears, yet long before the disc's fifteenth and final composition, fascinating or not, it's all started to run together.

Tracks: Disc One: Hexo-Lateral (for Buckminister Fuller); None That Are Giants; While All Are Away; On Behalf of My Benefactors; Prelude to The Orphans Disc Two: Drum in the Circle of Stone; Waiting, Waiting, Waiting; Make It Snappy; Yari; Bridge Made of Waters; The Happy Lonely Michael; An Alternative to Oregnum; On a Train; Dr. Lubbeck Pays a Visit, So Sam Phones Some Friends; Poece; Wasabi-One; Six-Ninety; Aquarina; the Machinery of History; The Everyday Phone Call (for Bobby Bradford); Wasabi-Two; Red Dirt; Wasabi-Three; Da A; Xenomorph.

A Gift for the Unusual (Music for Contrabass Saxophone)

Tracks: Single Booth Enclosure: Prime; Repetition; Mr. Amons Builds His Bridge; Eye My; Single Booth Enclosure Third: Revisitation; The Mozart Of Vice; The 15th; Just Something I Thought Of; Once Upon A Time On My Way To The Studio; A History Of Everything That Ever Happened; The Last Of Its Kind.