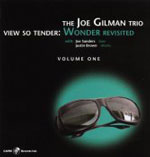 Jazz tributes to the music of Stevie Wonder are not really a new concept. His songs have served as the inspiration for vocalists as recently as Nnenna Freelon's 2002 album on Concord, Tales of Wonder, and he's been particularly a keen subject for sax men like Stanley Turrentine and Dave Pietro. However, to the best of my knowlege, this is the first album of piano trio interpretations of Stevie Wonder's music.

Dr. Joe Gilman is a full-time professor at American River College. With degrees in piano and jazz studies, contemporary media and education, the Sacremento-based musician/educator examined the music of Dave Brubeck on the two-volume Time Again: Brubeck Revisted series (Sunnyside, 2003 & 2005), which was well-received. He now approaches the Wonder oeuvre for the first time. As in the case of the Brubeck albums, Gilman does not limit himself to only the best-known works of the artist. In other words, listeners expecting a "greatest hits" approach will likely be disappointed. In fact, the last four tracks of this album consist of lesser-known Stevie Wonder pieces that only diehard fans will recognize.

One of the curiosities of this album is the omission of any tunes from last year's Motown record, A Time To Love, Wonder's first studio release in ten years. That album represented an ambitious work of fifteen new songs that evoked memories of Wonder's work from the '70s and '80s. The answer lies in the fact that Gilman recorded twenty Stevie Wonder tunes in 2004, prior to the availability of any of those new compositions.

The album begins with an intriuging arco statement by bassist Joe Sanders before Gilman picks up the familiar melody ine of "I Wish." Likewise, on "Don't You Worry 'Bout A Thing," which has evolved into a jazz standard over the course of several decades, the trio swings. Both "That Girl" and "Sir Duke" are known for their hooks and rhythmic pulse. The trio doesn't lose any of those things, taking both at an up-tempo pace. Sanders and especially drummer Justin Brown spur Gilman on during the course of the album.

Insofar as the more obscure pieces are concerned, lack of any prior familiarity with the original Motown recordings doesn't prevent enjoyment of melodies attractively played. In that category are such songs as "Love Light in Flight," from the film score of Woman In Red (1984), "Send One Your Love," from the failed Wonder album Journey Through The Secret Life of Plants (1979), "Smile Please," from Fulfillingness' First Finale (1974) and "Go Home," taken from In Square Circle (1985). The composition "Taboo" was recorded by Wonder as "Taboo (To Love)" on his famed Songs In The Key Of Life (1976).

If Gilman and company have another nineteen tracks of Wonder waiting, can the next two volumes in this series be that far behind?