By STEVEN CERRA
February 16, 2009
Sign in to view read count

Victor could have that effect on people. He played drums from the piano stool and booted the band along. 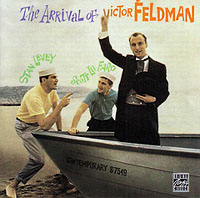 Mentioning my name in the same context as that of Gene Lees, the esteemed jazz writer, might be the height of presumption on my part, but in doing so in this instance, I intend to use it only as the basis for a speculative empathy that he and I might have in common.

Because of his close and enduring friendship with Bill Evans, the legendary jazz pianist, many of us in the jazz world have been patiently waiting for what could only be termed the definitive work on Bill and his music as provided by Gene Lees, one of the cardinal writers on the subject of jazz in the second half of the 20th century. And yet, while there is an exquisite chapter by Lees about Bill entitled "The Poet" in his compilation, Meet Me at Jim and Andy's, Mr. Lees has not ventured forth with the long- awaited, full-length treatment on Evans.

The reasons why Lees' book on Bill Evans has not materialized can only be surmised, but perhaps, and this is mere conjecture on my part, the admired writer-lyricist is too close to his subject. Also, he may be overwhelmed by the immensity of dealing with the size of the footprint that Evans left on Jazz. Or, it may be, again a supposition on my part, that the loss of his friend is still something that weighs heavily upon him, making the task of writing objectively about Evans a difficult one.

If the latter is the case, then I well know the feeling as I have been stymied in publishing something— anything—about Victor Feldman, my friend and mentor, since his death in May 1987. And while I keep doing interviews with people who knew Victor and amassing information about him from a variety of sources, I just haven't been able to organize what has, by now, grown into a sizeable mass of information, and issue forth a piece commensurate with the importance of this immensely talented musician and wonderful human being.

That is, until now.

Three factors prompted me to at least start the process of talking about Victor and his music:

First, I came across this comment from Peter Keepnews in his 12/28/1997 New York Times review of Ted Gioia's History of Jazz (New York: Oxford University Press, 1997).

Second, I re-read the following qualification or caution from the author Philip Caputo:

"No writer ever truly succeeds. The disparity between the work conceived and the work completed is always too great, and the writer merely achieves an acceptable level of failure."

So having been reassured by the likes of Messers Keepnews and Caputo that what I have been attempting to do is difficult, but that I should do it anyway, my third motivation to finally write something about Victor Feldman came in the form of an e-mail from Mrs. Shelly Manne in which she asked: "Have you done that piece on Victor, yet?"

The Mannes and the Feldmans were great friends. Out of respect for that friendship, and my own friendship with Victor, what follows is an initial piece about the advent of Victor Feldman on the American Jazz scene. In looking back over all of the research that I have accumulated concerning Victor, it is amazing to note how many Jazz musicians held this quiet and unobtrusive man in such high esteem. And, given such a collective high regard, one cannot help but be as puzzled as Mrs. Manne when she commented to me: "Why is it that no one ever talks about him? It's such a shame. He was a terrific musician, and Shelly had so much respect and admiration for him."

So let's rectify this glaring omission and talk about Victor Stanley Feldman, born in London, England, April 7, 1934, for as Joe Quinn commented in his liner notes to Vic Feldman on Vibes (Mode/VSOP, 1957): "By any standard of comparison, Vic Feldman is an extraordinary musician."

Indeed, Victor Feldman was a prodigiously talented musician, arranger and composer whose time in the jazz spotlight lasted only a relatively short while. He left it for a financially lucrative career in the recording studios and the world of popular music, including writing for Joni Mitchell and Steely Dan, primarily between the years 1965-85.

Because of his prodigious displays of virtuosity on drums at a very young age he achieved early notoriety in his native England as "Kid Krupa." Yet, after his stint with Woody Herman's big band, and with the exception of a few gigs to help pay the rent while settling into Los Angeles in 1956, he would rarely play the instrument in public again, preferring instead piano and vibes.

Listening (and watching) Victor Feldman play drums was a jaw-dropping experience, especially if you were a drummer and knew how difficult it was to play at Victor's very high level of precision, power and speed. Stan Levey, Shelly Manne, Colin Bailey and John Guerin knew what very few others in the U.S. jazz world were even aware of—namely, that Victor Feldman was one of the best drummers on the planet—bar none.

Ever the showman, Woody Herman knew what he had in Victor and would come to feature him nightly in an extended drum solo on "Mambo the Most." Thanks to a friend in New Zealand, who has an extensive knowledge of jazz in general and Woody Herman in particular, I was able to hear Victor play this feature on a 1956 radio broadcast by the band at the New Lagoon in Salt Lake City. I would venture to say that if you gave this track to 10 drummers as a "blindfold test" that 9 out of 10 would swear they were listening to one of Buddy Rich's extended, solo masterpieces.

Unlike Rich, who had never studied formally, Victor had studied drums in London as a young lad, beginning at the age of six. But like Rich, Victor had, as Stan Levey observed in the March 20, 1958 issue of Downbeat "...that God-given talent."

According to a 1999 e-mail that I received from Mr. Lawrence Woolf, who went to school with both Victor and tenor saxophonist Tubby Hayes:

"We all attended school together in the North London suburb of Edgware. Victor was only a fair student. He was more interested in tapping on his desk and humming along. Sometimes he got 'balled out' over it by teachers and students alike! His Uncle, Max Bacon, a standup comic and quite good drummer was teaching Victor to play drums which he took to 'like water.' Vic would talk and think about nothing else but 'Being the best drummer in the world.'

To cut a long story short, he became a child drum prodigy and played the music halls across England under the careful eye of his Uncle Max. Vic became a guest drummer with the Ted Heath and Ambrose orchestras and appeared on BBC radio...

In my opinion Victor Feldman [rest in piece] was one of the most underestimated musicians ever born."

Victor's drumming mates in England, such as Allan Ganley and Tony Crombie, shown in this photograph taken while Victor was making one of his appearances at Ronnie Scott's club at Number 39 Gerrard Street in London, knew of his protean prowess on the instrument, and another drummer, Ronnie Stephenson, who worked with Victor at Ronnie's club in 1965, said of him: "He could just take your breath away with his combination of speed and power. You just had to put it out of your mind to be able to play drums behind him."

Victor's voyage of discovery to the U.S.A. is explained by John Tynan in his article entitled "A Long Way from Piccadilly" that appeared in the June 6, 1963 edition of Downbeat.

During the interview with John that makes up most of the article, Victor recounted that it was during his tenure with Ronnie Scott's band that he made the crucial decision to emigrate to the United States. "I remember Ronnie saying—and I respected him and still do—one day in a cafe, with a certain look on his face, that I should go to America. The way he said it, he seemed so sure. I had been thinking of it in my mind, and it gave me added confidence."

The year was 1953, and by then Victor had become a multi-instrumentalist drummer-pianist-vibraphonist, having studied the latter in London with Carlo Krahmer, a well-known London mallet man. He has also spent a bit of time studying piano as well as theory, composition and harmony at the London College of Music, beginning at the precocious age of 15.

In July 1954, at the beginning of a tour of Europe, the Woody Herman Band shared a bill with Ronnie Scott's group at the U.S. Air Force base at Scunthorpe, England. Gene Lees in his Leader of the Band: The Life of Woody Herman (New York: Oxford University Press, 1995) noted: "One of the members of the Scott group was Victor Feldman, a young virtuoso of drums, piano and vibes by whom Woody was impressed."

Victor shared in the Tynan Downbeat article that while at Scunthorpe:

"'I got to know some of the Herman sideman including Al Porcino (lead trumpet), Chuck Flores (drummer), Bill Perkins (tenor sax), Nat Pierce (pianist) and Cy Touff (bass trumpet).' Their brief encounter with the young Englishman was probably forgotten by most of them, but later, in New York, it was to be happily remembered.

In October, 1955, Feldman made the plunge and sailed on the French liner Liberte, landing in New York on October 25th. ... Fate, as they say, took a hand in Feldman's destiny. Woody Herman was in town and Feldman ran into Cy Touff, who asked him if he was interested in joining the band.

Thus began another chapter in Victor's "love-hate relationship" with going on the road, for as he explained to Tynan:

Before leaving with Woody, Victor had made a prior arrangement to record an album for Keynote Records and set about making arrangements for the date. Bassist Bill Crow tells the tale of this ill-fated Feldman Keystone recording session in his book From Birdland to Broadway (New York: Oxford University Press), 1992, (pp. 119-120).