By MARC MEDWIN
September 7, 2009
Sign in to view read count 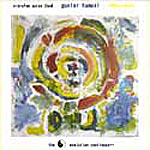 Glass, shimmer, impressionism and cool all vie for prominence throughout these excursions into the multiplicitous world multi-instrumentalist Gunter Hampel creates on every solo . Logical proportions are exposed only to disappear; tones glisten, swell and fade, either in rapid succession or in glacial dance. This is only the second solo release from the prolific improviser on his own label, a company which celebrates its 40th anniversary this year and a more fitting one would be hard to imagine.

From the opening moments of the title track to the end of the disc, we enter a world where the vibes are recorded close, unadorned and with no overdubs. That said, the many emotions that inform each moment become clearer with each airing. Listen to the first gestures in "Stretching," where a loudly struck ringing note, replete with overtones, fades into a long sustained sonority with the elegance of a natural phenomenon. The harmonies come out of Berg and early Webern while the semi-swung rhythms often hint at jazz' long history until a pedaled pentatonic chord sweeps all away. On "Skyrider," a pianissimo opening is interrupted suddenly by an upward flourish and then all recedes for two disembodied and ghostly tritones; the effect is breathtaking.

These juxtapositions occur throughout all of what are presumably improvisations, though there might be structures at play on some level. The harmonies move along with such fluidity and ease that only Andrew Hill's piano solos inhabit similar territory. It is as if we were being allowed a glimpse into Hampel's stream of consciousness, a constantly morphing confluence of his decades of musical experience. He has created a cinematic experience, with all attendant beauty and surprise and it's best to simply sit back and listen to it all unfold.