By BRUCE LINDSAY
December 7, 2015
Sign in to view read count 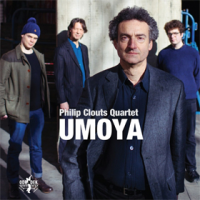 The Philip Clouts Quartet's Umoya, a follow-up to The Hour Of Pearl, (Point Records, 2013) is named for the Zulu word for Life Force. It's a positive title for an album filled with positive sounds.

Bass guitarist Alex Keen remains from those The Hour Of Pearl sessions. He's joined by saxophonist Samuel Eagles and drummer Dave Ingamells. Pianist and composer Clouts was born in Cape Town, South Africa and moved to the UK as a young child. African music remains a major influence in his writing and playing, as the eight original tunes on Umoya ably demonstrate, but he's open to a much wider range of influences which all go some way to informing these tunes.

It's Keen and Ingamells who make the first statement -opening "Lila" with a simple, repetitive, but irresistible groove (the tune takes inspiration from North African Sufi music). The groove stays in place as Eagles (on soprano) and Clouts trade solos, ensuring that dancers will have no trouble keeping their moves together even as the soloists take their own flowing, melodic, paths.

The centrality of the groove is a key element of Clouts' music—the nature of the groove may vary, but not its importance. On "Walking In Starlight" it's a reggae-influenced bass and drum rhythm that forms the foundation for Eagles' snaky soprano lines and Clouts' electric piano. "Umoya" shares this reggae rhythm: so, too, does "Direction South" although on this tune reggae takes turns with a gentle shuffle beat. "Meandering" has an unsurprisingly relaxed rhythm: one of the album's most overtly jazz influenced tunes it serves to illustrate Eagles' talent on tenor.

Whether the inspiration comes from South Africa, Jamaica, his adopted rural English home or the homelands of jazz, Clouts' compositions are strong and likeable. The quartet's playing is similarly engaging, a feeling of optimism pervading the tunes with a life force of its own.