U2 at Mercedes-Benz Arena in Berlin 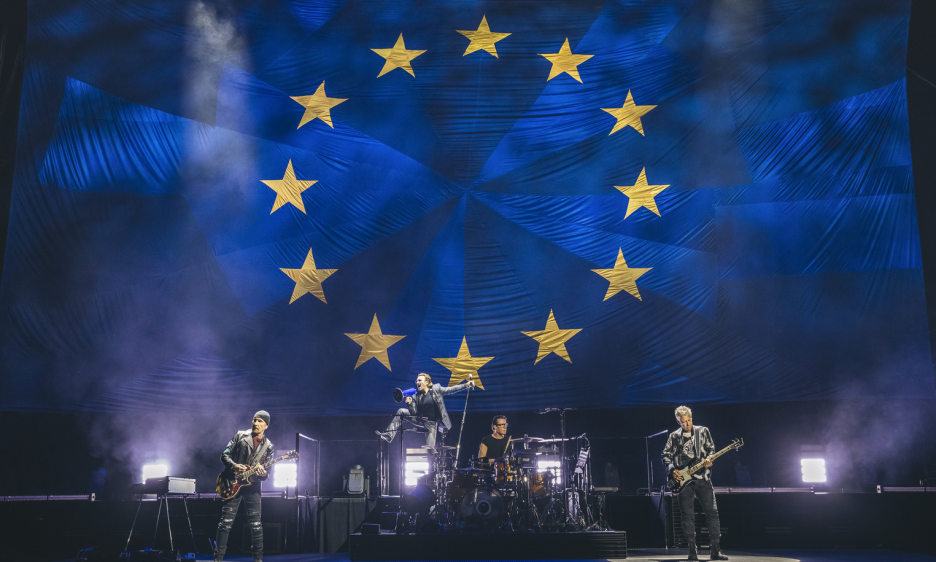 There is a popular adage about the value of perseverance that says it doesn't matter how many time you get knocked down but what matters is how many times you will get back. That certainly applies to the malady that hit U2 during their concert in Berlin during the second concert (01.09.2018) at the start of the last leg of their world tour Experience and Innocence in the support of their last album Songs of Experience. Several songs into the set and suddenly it appeared that singer Bono's voice was surprisingly cut out and he couldn't sing.

Back then, nothing indicated that this might happen. Bono sang with full fervor and was in great shape. The band was in great shape. But by the 4th song, it was evident he couldn't sing the high notes. He addressed the audience that something has happened with his voice and asked if the smoke could be turned off as he felt as if the smoke was causing him throat distress. And with an obvious problem with his vocal cords, he tried to assure everyone that it is a problem that would go away in a minute and that it's a temporary nuisance. So he tried to soldier on and the band went into the 5th song of the setlist which was "Beautiful Day" but it was evident that he has an insurmountable problem and he couldn't sing the high notes, and with the help of the audience he finished the song. Next, the band asked for a pause and returned to their dressing room to assess what has happened and how to proceed. Much to our disappointment after half an hour of waiting, the organizer showed up to say that the band couldn't continue. Later, on the band's official webpage, U2 issued an apology and it was announced that the Berlin concert wasn't canceled but it was rescheduled for November 13th, just several days after the several concerts in their native Ireland where the tour was supposed to end.

No one can say he wasn't disappointed by what has happened as many people have traveled from all over the world to see the concert. My brother came all the way from Kuwait to attend the gig. But Berlin is a great city and a lot of fun and it didn't seem like a failure. This malady that hit the band resembles the situation when U2 was forced to reschedule a gig in Paris in 2015 due to the terrorist attacks that happened in the city back then and they rescheduled it rather than canceling the concert. Again, perseverance is the ability to forge ahead despite setbacks that threaten to undermine all efforts to succeed. As it was reported in the news, U2 carried on with the rest of the tour without any problems or setbacks.

Two months ahead and I found myself in the city of Berlin again, but this time with my mom. Even Ognen Ivanovski, a lifelong friend who actually introduced me to this band years ago was also there with his son Damjan for the concert. And Berlin is probably the most hospitable city I've ever been to. You feel welcomed and at home there. Even if you stray by accident somewhere there is always something interesting happening or interesting to see. The city is on the move, constantly. Its history is overwhelming and the cultural scene is very vibrant and rich. I didn't miss to visit many of its landmarks including a visit to Bowie and U2 related locations including the legendary Hansa Studios.

The Mercedes concert arena where the concerts took place is a fantastic and enormous location and its capacity of 17.000 people was full to the last place. The arena is designed like an open-mining pit that provides an excellent overview of the stage. The band has set two stages on the opposite ends of the room with a walkway between them and a cage-like transparent video screens. Most of the speakers were located overhead and they created this incredible sound system that functioned perfect and equally clear from every place within the arena. This unique setup helped engage the complete space in the arena in a very smart way. Basically, it provided a great boost to the music and engaged the arena space both sonically and visually. And they used it wisely as everything was designed to draw the audience in rather than bedazzle and bombard.

Instead, all of this technology and props provided U2 with a space to underline the thematic arc of the show and to stress different aspects of their background—as political activists, humanitarians, as environmentalists, they tackled issues of social justice, refugees, gender equality, LGBT rights. This wasn't just a show meant only to entertain, but it was also meant to explain where they stand during these divisive times. The setlist and the visuals perfectly reflected that.

The show began with the Charlie Chaplin's rousing final speech from his film "The Great Dictator" that was splashed onto pictures of devastated European cities during and in the aftermath of WWII with a display of modern-day dictators like Putin, Kim Jong-un, and Trump. Suddenly, this gigantic construction sprang into life and it turned into a stage, a walkaway and a video screen, all at once. The first song "The Blackout" with its lyrics "democracy is flat on its back, Jack" simply blasted and rolled its way as an opener. The band was caged inside the video set and with its stroboscopic lights, the song shook the walls of the arena. Soon it was followed with "Lights of Home" when the walkway was lit and lifted for the singer to walk on it and sing.

Before long, Bono began shouting "We are U2 and this is our new song" and the band launched into "I Will Follow." There was an obvious difference between the way they played these songs during the previous, canceled gig and the rescheduled one. Back in September, they played great but this time they attacked the songs with much more ardor and gusto. This song was followed by another early career single "Gloria." There was a sigh of relief when he sang "Beautiful Day" and the crowd went nuts singing their hearts out. It was the sheer enthusiasm and vocal heft that transformed these songs into powerhouse anthems. On several occasions during the concert, Bono apologized for the September cancelation. On the other hand, he himself remains as magnetic presence as ever. There is a mystical quality about him which one cannot help being drawn to. Bono has charisma by the bucket load, but at the same time manages to remain earthy. He was also very sprightly as he moved tirelessly up and down the long walkway and the band was with him all the way. Energy saving is just not what U2 does.

As with every tour, U2 mixes the personal along with the political but with "Dirty Day" which originally is a song from the Zooropa album about writer Charles Bukowski where the subject is the delicate relationship between fathers and sons, Bono spoke about his dad and other members' dads and the obstacles they had to endure. Before long, Bono began to reminiscent about Berlin and recalled the band's clashes and conflicts while recording in Berlin's Hansa studios in 1990 in search of "the spirit of David Bowie and Iggy Pop" when the screens lit with U2 underground railway signs that can be found everywhere in the city -the U-Bahn. Much to my joy, the backbone of the show heavily relied on the Achtung Baby album. Last year, the band toured the world with the Joshua Tree album and the setlist was devoid of the songs from that album which were crucial for their live set since 1987. To hear these songs played in the city that inspired them initially was a great thrill. Bono even thanked producer Brian Eno who was also in the attendance that night at the concert as someone who has built the table that they sit on. The band then launched into songs from their own Berlin era: "The Fly," "Zoo Station," "Who's Gonna Ride Your Wild Horses," "Even Better Than The Real Thing," "One," "Acrobat," "Stay (Faraway, So Close)."

The band then pulled together for genuine wow moments on tense renditions of blasters such as "Elevation" and "Vertigo." The last quarter of the show was devoted to politically charged songs and the band played songs such as "Pride (In the Name of Love)," "Summer of Love" and "New Year's Day." The video screens lit with contrasting visuals of right-wing protesters and agitators as opposed to activists who protested for more just societies. And with "New Year's Day" the band even spread the European Union's flag behind them calling for unity. For the encore, they performed several emotionally charged songs such as "One," (with messages of women empowerment), "Love is Bigger Than Everything," and "13 (There is a Light). The atmosphere was pulsating right down to the very last note and ended with a huge lightbulb that swung over at the end of the stage that symbolized a glimmer of hope in a dark world.

The tour-closing show in Berlin was truly a joyous concert that not only explored the full gamut of human emotion but also proved that U2 is more than capable of entrancing audiences. The technology they used was only a tool as the band and its songs were firmly entrenched at the heart of the event. It was the music that truly dazzled. This triumphant concert is also an ending of an enormous, eventful and important chapter in the band's career that began 4 years ago with the release of Songs of Innocence that was followed by 3 world tours and another album, the aforementioned Songs of Experience. The band sounded fantastic—it's hard to think of another band that can shift so seamlessly from elegance and control to joyous mayhem or bedlam. More than 40 years into their career, U2 is a band that inspires a certain kind of undying devotion among their fans: perhaps uniquely among their peers. Berlin was special and it will certainly live long in the memories of those that attended it and were transfixed by what U2 do best.