By JOHN EYLES
October 17, 2020
Sign in to view read count
In Another Timbre's brief notes about the label's autumn 2020 releases, two of the five album descriptions included the word "unusual," the first time that this has occurred. Monument of Diamonds is described as "using an unusual 17-tone scale developed by Erv Wilson." That is followed by the blurb for Good Day Good Day Bad Day Day, which makes a link between the two: "Talking of unusual, Oliver Leith's extraordinary 45-minute piece for piano, keyboards and percussion."

Of course, describing something as "unusual" is no bad thing, particularly for music. Surely we can all think of well-known and respected record labels whose output follows a house style and/or sound, making it instantly recognizable or even formulaic—"the usual," in fact. In stark contrast are labels which give opportunities to those who experiment, take risks and break new ground. Talking of which... 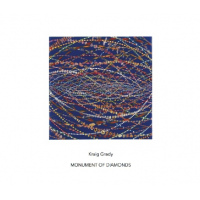 The title piece of Monument of Diamonds, its only track, was composed by the US-born, Australian resident, composer & sound artist Kraig Grady, who was influenced by the work of Ervin Wilson (1928-2016) on microtonal tunings after the two met in 1975. The composition was written to use Wilson's rare 17-tone version of a scale utilizing high harmonics called Meta-Slendro tuning. It is here played by trumpet, saxophone, trombone and organ, which were adapted or specially constructed to play the tuning. While such instrumentation, particularly its emphasis on brass, is not commonplace in performances of contemporary compositions, it is very successful here.

The players never sound like renegades from a jazz combo, instead favouring long, sustained notes some of which, due to the tuning, may sound unusual to ears accustomed to conventional Westerns tunings; those familiar with African or South-East Asian scales or Just Intonation are likely to feel quite at home. Across its forty-two minutes, the piece evolves slowly and gently as different combinations of the instruments unfold. The end result has a soothing meditative quality which is habit forming, but contains enough shifting detail to hold listeners' attention throughout and to make repeated listenings highly rewarding. This recording will surely increase Kraig Grady's profile and lead to demand for his past recordings and future ones. 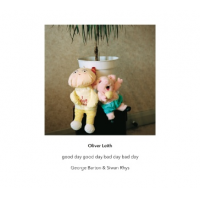 As can often be the case with Another Timbre albums (notably those performed by Apartment House), it is difficult to know who deserves the greater praise for Good Day Good Day Bad Day Bad Day, the composer or the performers. The composer Oliver Leith seems to have been writing since about 2011. (Plenty of his work can be heard via Soundcloud.) This piece was commissioned in 2018 by the duo GBSR (aka George Barton and Siwan Rhys) when they were part of the Young Artists' Scheme at St John's Smith Square (SJSS), in London, as they wanted "a big piece that would fill one whole half of a concert"; they first performed it at SJSS in May 2018. The version heard here was recorded at Real World Studios on 22nd and 23rd March 2020 (by which time GBSR were very much up-and-coming, their 2019 recording of Stockhausen's "Kontacte" having been much praised, including being named Album of the Week by The Guardian). This recording of "Good Day Good Day Bad Day Bad Day" features Barton on percussion and Rhys on piano and electric keyboard, the empathy between the two being tangible as they complement one another perfectly throughout.

The composition comprises eight untitled sections (or movements, as Leith's website calls them) ranging in length from just over two minutes to almost ten. There are considerable differences between the eight sections, each having its own distinct soundscape and emotional landscape. Transitions between sections are frequently seamless, meaning that the entire composition can be heard from beginning to end without any clunky non sequiturs. Leith wrote the piece with Barton and Rhys in mind, and did a good job as they sound ideally suited to it and vice versa. Leith and GBSR deserve equal credit for the success of this piece, which indicates that we shall be hearing far more from all three of them in years to come.