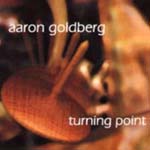 Pianist Aaron Goldberg, who turns twenty-five at the end of this month, is one of those people who can do it all. You know the type: dean's list, first-string baseball player, student body president, lady's man, fixes his own car, fluent in seven languages, and still knows the value of a dollar. Now, I don't know those particulars on Goldberg; just made it all up on the fly. But you know the type; successful at whatever he does.

The pianist's bio sheet reveals enough to enable one to see the pattern. A gifted pianist at an early age, Goldberg eventually studied with Jerry Bergonzi and later with Betty Carter. Although he graduated magna cum laude from Harvard with a degree in History and Science, Goldberg spent his leisure hours gigging around Boston's Berklee College with friends. There is more information available at http://www.jcurverecords.com . The web page also offers a photo, shopping information, and details on the pianist's debut album Turning Point. Tenor saxophonist Mark Turner is featured on six of the eight tracks. Five of the pieces on the album are Goldberg's compositions.

Goldberg's title track serves as a fine example of modern mainstream jazz, containing equal parts drama and creative surprise with a touch of swing. Saxophone, piano, bass, and drums work together with a strong sense of cohesion. The natural timbre and variety of percussive colors on "Jackson's Actions" makes the piece a fast burning, hold-your-attention, toe tapper. Joshua Redman presents "The Shadow of your Smile" in standard fashion, then takes turns with Goldberg in highly creative improvisation. Dizzy Gillespie's "Con Alma" is presented by the piano trio in a lively 5/4 meter; sort of an Afro-Cuban "Take Five" alongside the pianist's fast blues. Carla Cook's wordless vocals on "Fantasy in D" and "Mom's Tune" place her deep alto voice in unison with Turner's tenor saxophone as an additional instrument for the ensemble. The two even weave and trade as the piece reaches its close. Aaron Goldberg is a talented composer and pianist who knows what direction he wishes to take. Highly Recommended.