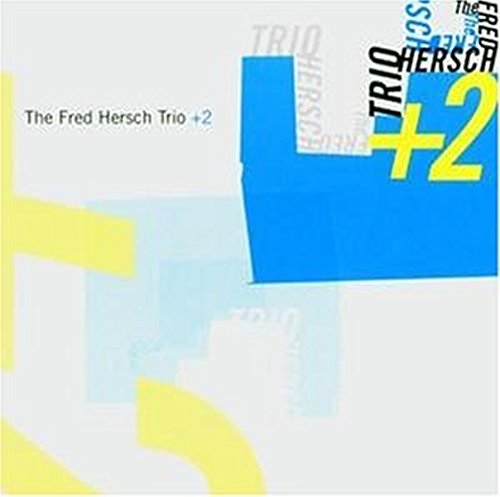 Following 2002’s Live at the Village Vanguard , pianist Fred Hersch takes an artistic leap, expanding his trio to a quintet for the imaginative Trio + 2. While the result is somewhat more abstract, it is equally compelling.

Recorded in just a single day, this album finds Hersch and the trio at a remarkably high level of interaction. While bassist Drew Gress and drummer Nasheet Waits are both in-demand players, they almost feel like they are coming home when they reunite with Hersch; the communication is just that strong. The addition of Ralph Alessi on trumpet and saxophonist Tony Malaby simply widen the sonic palette, allowing Hersch to broaden the scope of his compositions.

Take “A Lark,” which was clearly written with trumpeter/composer Kenny Wheeler in mind. Like Wheeler’s best compositions it is deeply melancholic; also like Wheeler it features snaking horn lines that seem to converge, spread out and then converge again. Alessi, usually heard in more avant settings, is clearly touched by the poignancy of the composition, and delivers a deeply emotional solo that refers to Wheeler without being imitative.

“A Riddle Song,” an exercise in the use of perfect fifths, starts the album out on a high point. Waits drives the tune with an approach that begins subtly but builds, ultimately unleashing what Hersch calls “a force of nature”: a muscular intensity that bridges the divide between Tony Williams and the recently-departed Elvin Jones.

The only non-original of the set is Hersch’s cover of the Lennon/McCartney tune “And I Love Her.” Tender and romantic without being maudlin, it highlights Hersch’s strength as an interpreter of ballads; his solo is the definition of spontaneous form, with motifs that never lose site of the song’s essence.

The group finds ways to twist around a more conventional sense of swing. “Miss B.” might have been interpreted in a straightforward fashion, but Gress’ strummed bass and Waits’ tumultuous drumming lay groundwork for more outward-reaching solos from Alessi and Malaby. In fact one of the dominant characteristics of the whole set is how rhythms are often implied but rarely resolved, alluded to but never quite cemented. It creates a certain sense of unease that is distinctive and somewhat disconcerting, but not in a bad way. Even pieces like the gospel-inflected “Down Home” never quite settle into a solid groove; Waits plays around it and Gress suggests it, but the downbeat that is the inevitable resolution never comes.

That’s not to say the group doesn’t occasionally fall into more conventional treatments. “Marshall’s Plan” manages to swing along nicely, but with Gress and Waits following Hersch’s harmonically developed solo with a certain sense of abandon, things still manage to break up here and there, more hinting at than playing time.

Arguably his most experimental recording to date, Trio + 2 finds Hersch continuing to evolve the format and experiment with its foundations, resulting in another daring and exceptionally satisfying set.

Visit Fred Hersch and Palmetto Records on the web.