By MATTHEW WARNOCK
July 8, 2009
Sign in to view read count 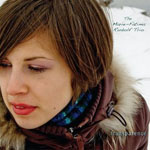 Transparence is an emotionally invigorating and musically captivating release by Montreal-based pianist and composer Marie-Fatima Rudolf. Montreal has long been known for its strong jazz scene and world class summer jazz festival, and it is performers such as Rudolf that have helped the city become a beacon for jazz in Canada and beyond. The songs on Transparence are thoughtfully composed and arranged, the trio grooves hard, and the improvised solos are both melodically creative and rhythmically diverse; producing an album that is as highly listenable as it is intellectually stimulating.

The collection of tunes on Transparence is a mixture of original compositions by Rudolf and bassist Martin Heslop, and several clever and fresh interpretations of the jazz standards "Moon and Sand," "My Funny Valentine" and Cole Porter's "So in Love." One of the compositional highlights of the record is the title track, which was composed and arranged by Rudolf. It features a slow funk-based groove that brings to light the trio's heightened sense of group dynamic, something that has been developed by many nights spent together on Montreal bandstands. The tune begins with a memorable, vocal-like melody line that leads into a strong solo by Rudolf, showcasing her ability to draw from the tune's main melody as inspiration for her improvisations. By keeping the melody line alive during the solo, Rudolf blurs the lines between the head and the blowing, providing a sense of composition and improvisation throughout the piece—and the rest of the album, for that matter.

Whether it is interpreting the melody of a classic standard, laying down a modal, chord-based intro, or flying through complex improvised single-lines, Rudolf is at her best on every track. Her strong harmonic sense and ability to weave melodic based ideas through her lines brings a sense of maturity to her playing; something that one would not expect from such a young player.

The rhythm section of Heslop and drummer Eric Thibodeau is also stellar, as they provide several memorable moments as both compers and soloists. This includes Heslop's carefully crafted improvisation on "My Funny Valentine," which features a powerful interaction between all three members of the ensemble.

Transparence is a strong debut release by Rudolf. The compositions are well-thought-out, the ensemble is tight on every track, and the improvisations are thought-provoking and highly creative. With a debut like this, the sky's the limit for the Montreal pianist and her trio.

Moon and Sand; Transparence; My Funny Valentine; Run to the Hills; Separation; So in Love; Rock Ballad.